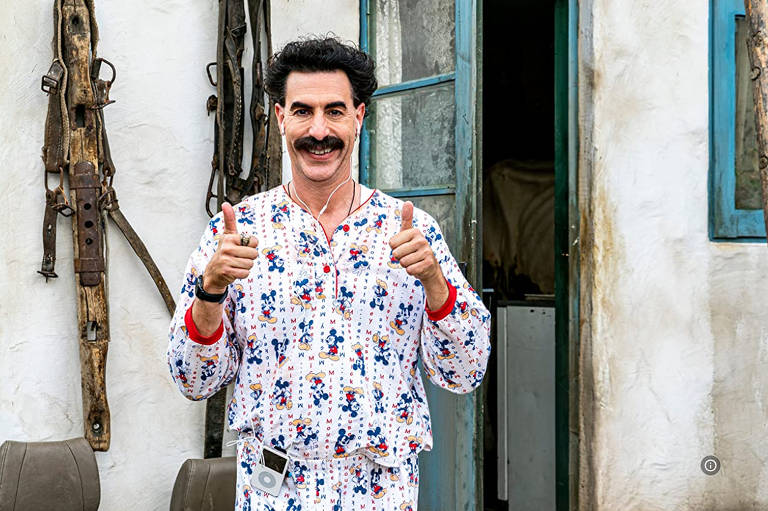 Kazakhstan’s most infamous journalist is back at it, doing what he does best after 14 years away from the big screen (big stream?). The new film directed by Jason Woliner, succinctly titled Borat Subsequent Moviefilm: Delivery of Prodigious Bribe to American Regime for Make Benefit Once Glorious Nation of Kazakhstan, dropped early on Prime Video […]

The Dictator is Sacha Baron Cohen’s first departure from taking one of his well known characters from The Ali G Show to the big screen. And unlike Borat and Bruno, his latest endeavor is not a faux documentary – but rather an actual scripted comedy like his first film Ali G InDaHouse. Depending on how […]

THE DICTATOR Opens May 16! Enter to Win Passes to the St. Louis Advance Screening!

Enter to win a pass good for two! The heroic story of a North African dictator who risks his life to ensure that democracy would never come to the country he so lovingly oppressed. Cast: Sacha Baron Cohen, Anna Faris, Ben Kingsley Director: Larry Charles In order to enter the contest, become a fan of […]

After being together for almost eight years Sacha Baron Cohen and Isla Fisher have finally tied the knot in a small ceremony in Paris. “We did it – we’re married! It was the absolute best day of my life and in so many beautiful moments I missed you all so much,” said Fisher in an […]

Kazakhstan’s most famous journalist talks about his hobbies, his former wife, and dances with Beck.

Bruno Given NC-17 Status Until Re-submitted

Sacha Baron Cohen’s “Bruno,” the sequel to the very successful mockumentary “Borat,” was given an NC-17 rating by the MPAA. Universal plans to edit the film down to an R rating by the MPAA, as the NC-17 status would clearly hurt ticket sales and moreover the amount of theaters that the film is released in […]

The Summer of Too Many Movies

The first thing you might think is, is that possible? Too many movies? Well I believe it might be for most people. Let’s take a look at all the big potential blockbuster’s this summer. May 1st – X-Men Origins – Wolverine Wolverine is the first big blockbuster type film of the summer. It will be […]