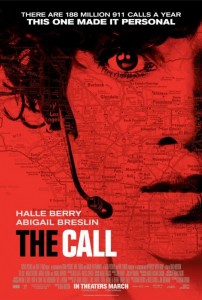 My mother always told me that if you didn’t have anything nice to say then don’t say anything at all.  Well, if I were to follow that rule then this would be a very short review.  This flick was a complete disaster from the get go.  It’s one bad thriller cliche after another and even ACADEMY AWARD WINNER Halle Berry couldn’t save it.

In The Call, Halle Berry plays Jordan Turner, a seasoned 911 operator for the LAPD who accidently causes the death of a young girl.  Six months later, a similar abduction takes place and Jordan finds herself desperately trying to save young Casey Welson (Abigail Breslin) and not getting her killed like she did before.  This is one of those “by the numbers” thrillers that an average person finds themselves in an extraordinary situation and finds that he or she has the skills and resolve to overcome the crazy situation that they have been thrust into.

The problems with the movie are far to many to list, but the main issues were the horrid script, the shit acting , and an ending that could have been pretty awesome (but they screwed that up).

I will say that Berry gave it her all (even with a hair cut that looks like it’s from the early 90’s), but it didn’t help.  There were soo many cliches.  For instance, after getting a young killed, Jordan can’t go back to answering calls.  Instead, she becomes a 911 operator instructor.  Of course, just as she’s telling the class that they can never get emotionally involved, a call comes in and Jordan finds the courage to answer it and help a recently kidnapped Casey (Breslin).  It was very formulaic.  Of course the one person who can get young Casey out of her perdicament is the same person who encountered a similar situation and needs to be redeemed. This honestly felt like a really long episode of Law & Order complete with all kinds of technology that I’m pretty sure doesn’t exist (they are able to pull finger prints from some broken glass and get the results back within 5 minutes).

As things progressed and the movie got worse and worse, things took an interesting turn.  Jordan was listening to clips of her hour 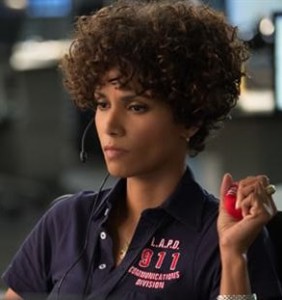 longordeal with Casey an she hears a sound in the background of the final place Casey was before she lost contact.  Jordan uses her amazing digital sound taker outer and decides to go check a spot the police have already been.  At night.  By herself.  She looks around and hears the same noise off in the distance.  I won’t tell how the movie ends, but I will say, the director had what could have an ending I never saw coming and the he screwed that up as well.

The bright spot for was WWE Studios. They are actually trying to make decent movies and not using their studio as a way to get their stars onto the big screen.  Granted they did put in WWE Superstar David Otunga into the movie, but we weren’t beaten over the head with him.  They did the similar thing with current Intercontinental Champion Wade Barrett and his small role in Dead Man Down. If they continue to use their studio as a platform for smaller films and for newer directors to cut their teeth than I’m all for it.  I think that’s a brilliant idea.

Overall, I’d give The Call a  D-.  If they had gone with the ending that I thought they were going for, the movie would have gotten the bump to a “C”, but instead they went with a cheap rip off of the first Saw. On a side note, can some explain what has happened to Halle Berry?