If you are a fan of Batman, and you haven’t listened to Kevin Smith’s Fat Man on Batman podcast – it is a must.

Every Thursday Smith interviews either a cast member or creative part of the Batman universe. His first guest was writer Paul Dini – best known for his involvement with Batman: The Animated Series. The famous director has gone on tape dozens of fascinating interviews with Batman heroes Mark Hamill, Bruce Timm, Kevin Conroy, Adam West, Scott Snyder, Grant Morrison, and many others.

Yesterday Smith interviewed Christopher Drake, who composed the score for The Dark Knight Returns Part 1 and 2. Drake was hand chosen by director Guillermo del Toro to compose the music for Hellboy: Sword of Storms and Hellboy: Blood and Iron. He has since gone on to work on Batman: Gotham Knight, Wonder Woman, Superman/Batman: Public Enemies, Justice League: Crisis on Two Earths, Batman: Under the Red Hood, All-Star Superman, Green Lantern: Emerald Knights, Batman: Year One, and Justice League: Doom between 2008-2012. 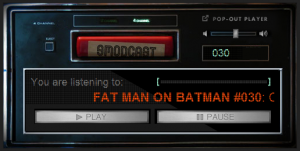 Click the player above to listen to “Fat Man on Batman #30: Christopher Drake”

In the Fat Cave this week, we feel the music when we talk to the composer of THE DARK KNIGHT RETURNS Pt. 1 and Pt. 2, Christoper Drake! From Wonder Woman to Superman to Green Lantern to Batman to the entire Justice League – Chris has scored all the biggest heroes in the DCU. Hear what it takes to put the super into hero.