20 Episodes of ‘Batman: The Animated Series’ You Can Watch Online For Free 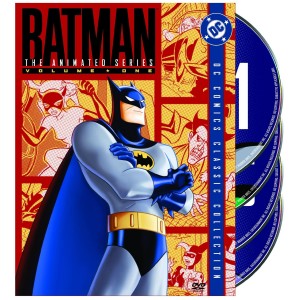 Hands down, one of the greatest superhero cartoons – maybe cartoon in general – is Batman: The Animated Series. The animation was beautiful. The show featured a fantastic orchestral score by Shirley Walker. Kevin Conroy voiced Batman, and Mark Hamill voiced the Joker. With a long list of memorable episodes, there isn’t much not to like about this iteration of the caped crusader.

Here are 7 things you didn’t know about THE voice of Batman – Kevin Conroy.

There are still several ways for fans who get nostalgic about the classic series to get their fill of the Batman. Although Batman: The Complete Animated Series

has long been out of print, you can still pick up volumes 1, 2, 3 and 4 of the collection separately on Amazon. Alternatively, you can watch full episodes of Batman: The Animated Series online at Warner Brothers’ website.

Here is a list of Batman: TAS episodes you can watch online: 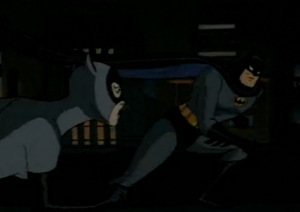 The Cat And The Claw, Part I (Season 1 : Ep. 1)
Catwoman steals a valuable necklace to fund the purchase of land for a mountain lion preserve but is thwarted by a group of terrorists.

On Leather Wings (Season 1 : Episode 2)
When a vicious bat creature known as Man-Bat, starts terrorizing Gotham City, everyone mistakenly thinks that Batman is the culprit. Batman must find out who the mysterious Man-Bat is and clear his own name

Heart Of Ice (Season 1 : Episode 3)
Brilliant cryogenics expert Dr. Victor Fries is transformed into Mr. Freeze, a vengeful creature who can only survive in subzero temperatures.

Feat of Clay, Part I (Season 1 : Episode 4)
A popular actor renowned for his ability to play any part has a terrible secret–he’s addicted to a strange chemical formula that enables him to alter his facial features without makeup.

Feat of Clay, Part II (Season 1 : Episode 5 )
Clayface learns that the man responsible for his disfigurement is to appear on TV, promoting a skin conditioner containing the same chemical that deformed him. 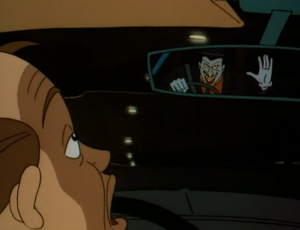 Joker’s Favor (Season 1 : Episode 7)
When a timid accountant accidentally runs afoul of the Joker, he promises the Joker anything if the villain will only let him go.

The Cat And The Claw, Part 2 (Season 1 : Ep. 8)
When Catwoman infiltrates the underground headquarters of the terrorists, both she and Batman are captured and left to die as victims of a viral plague.

Pretty Poison (Season 1 : Episode 9)
When District Attorney Harvey Dent is poisoned after a dinner date, Batman makes the horrifying discovery that his date was Poison Ivy, a plant-obsessed villainess.

Be a Clown (Season 1 : Episode 11)
The Joker infiltrates the birthday party of Mayor Hill’s son in order to plant a bomb. 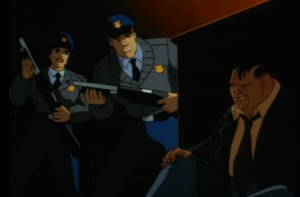 P.O.V. (Season 1 : Episode 13)
Bullock’s account of a botched sting operation is so at odds with the other officers’ testimony that the police investigator suspends everyone involved.

The Clock King (Season 1 : Episode 14)
When a maniacally punctilious man faces financial ruin because of attorney Hamilton Hill, he transforms into the devious Clock King and swears revenge on Hill, now the mayor of Gotham.

The Last Laugh (Season 1 : Episode 15)
The Joker employs a lethal mind-altering laughing gas to transform the citizens of Gotham into total fools.

Eternal Youth (Season 1 : Episode 16)
Alfred and his friend, Maggie Paige, visit a health spa that is actually run by the nefarious Poison Ivy. 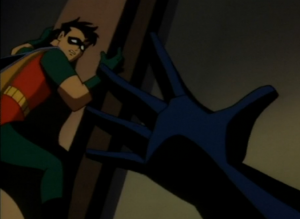 Fear of Victory (Season 1 : Episode 19)
The Scarecrow uses a fear chemical triggered by adrenaline on Gotham’s greatest athletes, then bets against them to reap the winnings.

I’ve Got Batman in my Basement (S. 1 : Ep. 20)
After the Penguin sprays Batman with nerve gas, a 12-year-old boy rescues the unconscious hero and hides him in his basement.