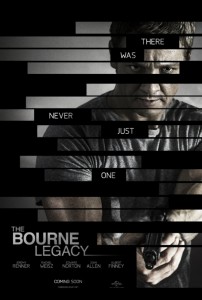 The original Bourne trilogy will possibly go down as the greatest action/thriller series of all time. The series won audiences and critics over with smart storytelling, captivating action, and a knockout performance by Matt Damon as Jason Bourne.  The film wrapped with the critically acclaimed Bourne Ultimatum, a film that seemingly wrapped up all loose ends. Although as we all know, if Hollywood is making money off of something, they aren’t going to stop while they are ahead. Despite losing director Paul Greengrass and the star of the series, Matt Damon, the studio moved forward with a new entry in the series, The Bourne Legacy.

The Bourne Legacy takes place during the events of The Bourne  Ultimatum, as we can tell from news reports continually played throughout the film. Instead of focusing on more of Jason Bourne’s exploits, we are introduced to Aaron Cross. Cross is an agent of Outcome, a step forward in the programmable solider that started with the previous films Treadstone program. When Jason Bourne and Pamela Landy blow the lid on Operation Blackbriar the CIA makes a quick decision to dispose of many of its projects lest they be exposed.  Agents are systematically wiped out by a change in their medication. Cross, who is in Alaska on a training mission, narrowly escapes death through quick thinking and athletic prowess. Outcome agents are genetically enhanced through viral pills. Blue pills increase cognitive abilities and green pills increase the body’s athletic capabilities. Cross who before put in Outcome has a sub-average IQ is quickly in a race to acquire more pills. To do this he must save Dr. Marta Shearing, who through luck has escaped a mass killing at the laboratory that monitors the Outcome agents. The two must stay ahead of the government operatives who wish to eliminate the loose ends.

It’s entirely possible that if we had never seen any of the previous Bourne films The Bourne Legacy might have been something more highly regarded. It doesn’t live up to the rest of the series though. The story lacks the intrigue of the original trilogy due to most of the loose ends being tied up in The Bourne Ultimatum. What we get instead is a repetitive race against time that lacks the sense of danger perceived in the previous films.  The film tries its best to piggyback off the previous films and create a new series of problems, but it comes across as a cheap excuse to rehash a popular franchise.

The film being a bit of a lame duck is no fault of the actors, who do an admirable job.  Renner is captivating as Cross, but lacks the enigmatic intrigue of Damon as Bourne. Cross is beefier, but his intellect isn’t on the same level as Bourne, and the film suffers for it.  Rachel Weisz plays well as a scientist who is clearly over her head, but never quite sells the romantic relationship between her character and Renner’s.

Edward Norton plays the films main antagonist, Eric Beyer, the man tasked with cleaning up the sloppy work of those ahead of him. It is insinuated that Beyer and Cross have a past, but the film never fully explores it. Norton plays Beyer as a paper pusher who has moved up the ranks to grab some real power behind the scenes, and wishes to flex all of his considerable pull. There is a bit of a disconnect as Beyer never leaves the office, and is never a perceivable threat to Cross.

One would hope that you could at least go for the action pieces, but many will be disappointed to see very little action. For something so short on plot, it would be understandable to have some thrilling action to compensate. The action is few and far between, and when it does happen it lacks the polish of the previous films. The parkour isn’t very exhilarating unless you enjoy people jumping off roofs and then looking over them for a few seconds. The inevitable car chase scene will challenge one’s suspension of disbelief.  One of the best things of the previous Bourne films were just how real the action felt, but The Bourne Legacy looks like it was shot on rails. It isn’t awful, but it certainly feels like a Hollywood set piece.

The film wraps up with ambiguous end, which is obviously there for potential future sequels. Although, after seeing this it might be best to close the book on the Bourne series unless Damon can be convinced to come back and reprise his role of Jason Bourne.