The Bearded Reviewer: Jim Bertel Takes On ‘The Bourne Legacy’ 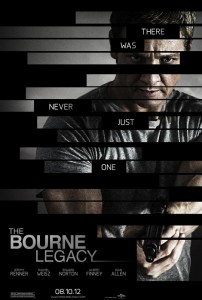 Many people consider The Lord of the Rings, Star Wars, or even the new Nolan Batman series to be the greatest trilogies that Hollywood has produced. Allow me to commit sacrilege for a moment and state first and foremost that the Bourne trilogy is my absolute favorite trilogy of the bunch. Each movie succeeded in being better than the prior entry. And even though The Bourne Ultimatum left us with an ending that could have continued the series, we knew better than that. The Bourne fanatics knew the series was done and that Jason Bourne’s story was finally complete. Or so we thought.

I want to keep this as spoiler free as possible, but it is worth mentioning that the trailers are mildly misleading. Shock of the century, right? Either trailers show you the whole damn movie in two minutes or they use crafty editing to sell you a product that you didn’t pay for. [Climbs down from his soapbox]. So try to walk into this movie with a slightly open mind.

The movie starts out with Aaron Cross (Jeremy Renner) doing what most of us do on the weekends – swimming half naked in an Alaskan lake and then trekking miles and miles over harsh terrain. Scenes from The Bourne Ultimatum are then spliced into the film to show the parallels between the two storylines. More on this later. We are then introduced to Dr. Marta Shearing (Rachel Weisz). She is part of the team that is developing all of the fancy pants science that makes it possible for these normal soldiers to be super soldier karate-chopping machines. After this point the CIA does what it apparently does best.

“Things are going wrong. What should we do?”

“Burn everything to the ground, kill everyone, and piss in the ashes.”

“Cool. I don’t foresee any issues arising with that.”

Cue a lot of head stomping, running, chase scenes, restrained emotional connections, shaky cams, and more head stomping. From here on out it is like a tornado of ass kicking was injected with PCP.

So what’s the problem?

Unoriginality is the problem here. The movie feels like a remake of The Bourne Identity with bits and pieces of the other movies from the trilogy tossed in. In fact, it literally tosses in pieces of The Bourne Ultimatum. I really wish they would have incorporated those storylines more than they did. It could have been very clever ala Ender’s Game and Ender’s Shadow.

The opening and closing shots from The Bourne Identity and The Bourne Legacy are nearly identical. The end scene in Legacy even has the same damn song. There is the requisite hotel bathroom scene, the sweaty restrained “holy smokes we should probably make babies when all of this killing stuff dies down but until then let’s just look at each other longingly” scene, and the really awesome extended chase scene. The ending is left open much like The Bourne Identity. They can venture off into the sunset and live happily ever after or the CIA can start rustling some more jimmies and have another two hours of round house kicks to the face.

Another problem is the use of extreme close-ups and the shaky cam. Shaky cam during fight scenes? I don’t like it, but I get what the director is going for. Shaky cam when someone is getting coffee from the break room? Stop that. Stop that right now. If I wanted to see Michael J. Fox direct a movie then I would… no, actually I would never want that.

So is there anything good about it?

Jeremy Renner and Rachel Weisz have a chemistry and a story that I would love to see developed further. Maybe it will fill that Jason Bourne/Nicky void that was never really satisfied in the trilogy. Jeremy Renner brought a slightly more human aspect to the role. He seemed less robotic than many of the other operatives we have been introduced throughout the series.

The movie also succeeds at being what it tries to be: a Bourne film. It is beat-by-beat satisfying for those that are looking for a clever action movie.

The  Bourne Legacy is a very satisfying, solid movie for action fans. It will probably fall a little flat for fans of the original films however. We can almost guarantee that there will be a sequel so let’s hope they develop the next film in a bit more of an original direction so that it may take on a personality of its own.