Comic Pick of the Week: Spider-Men #4 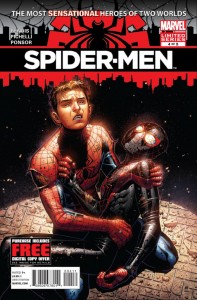 As I was going through my books for this week, no title jumped out and screamed “Pick Me!”  Only Spider-Men #4 by Brian Bendis and Sara Pichelli stood out from the rest.  This is the fourth issue in the 5 issue mini series.  Some of you might remember I picked the first issue of this mini as a previous Pick of the Week.  In that review, I was looking forward to seeing the reaction of the Ultimate version of May Parker and Gwen Stacy coming face to face with the grown up version of Peter Parker (the Ultimate version of Pete died last year).  In this issue, we get to see that interaction.

The book opens with the adult Peter standing on the front lawn of May and Gwen’s home.  An unmasked Peter is slapped in the face by May and kicked by Gwen while they scream at him for trying to impersonate their version of Peter.  Miles Morales (the new Ultimate Spider-Man) intervenes.  Miles tells May and Gwen that he IS Peter Parker, but he’s from a different earth.  With that information, May passes out.

There were other things going on in the book (i.e. the Ultimate version of Tony Stark and Nick Fury trying to get Peter back to his time), but it was the emotional impact of some of the panels that made it Pick-worthy. There was one scene in particular that literally made me tear up.  May comes to while Peter is talking to Gwen and Miles.  She makes her way to her Peter’s old room where she has a conversation with him.  While Peter is telling her about his version of Uncle Ben, they simultaneously say, “With great power comes great responsibility”.  May says, “Oh my God, it is you. Look at you.”  The two embrace.  May gets to see how her Peter would have grown.  It was so well written.  Bendis captured the tone perfectly.

Another conversation, this one between Peter and Gwen, was a little uncomfortable to read.  Everyone knows that Pete’s version of Gwen died at the hands of The Green Goblin, but she is very much alive in this world.  She asks Peter many questions about her other self, and Pete answers them while avoiding telling her the other version of herself is no longer alive.

The downside of this issue is Pichelli’s art.  The first three issues were phenomenal.  She showed why she is one of the best artists doing comics today.  This book, on the other hand, was just off.  The art looked really rushed.  I initially thought it was a different inker, but that doesn’t seem to be the case.  Her lines were not as crisp, and some her faces looked odd.  The art was ok, but nowhere near as tight as in previous issues.

However, Pichelli’s lacking art doesn’t takes away from the story at all.  Bendis’s script more than makes up for it.  The mix of humor and raw emotion carry this issue.  As I’ve said before, this mini series is shaping up to be a great little story.  If you love Spider-Man or just love good comic booking, go find these issues.  You don’t need to know what’s going on in either of the main books (The Amazing Spider-Man & Ultimate Spider-Man) to understand this mini.  It’s worth your time.