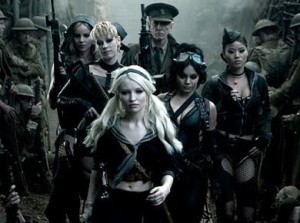 I went into this film with a bias.  I will admit.  I thought the trailers looked awesome.  I have loved most of Zak Snyder’s work thus far so I was very excited to see him take on his own original work.  The film was on my list of top ten most anticipated films of the year.  There were two drawbacks to the film though.  While this has nothing to do with the success of this film, my previous two films that appeared on my ten most anticipated (THE ADJUSTMENT BUREAU and BATTLE: LOS ANGELES) both left me disappointed.  Also, the film appeared to be all over the place as far as genres and influence go.  Obviously this was Snyder’s intention, but it could still be a recipe for disaster.  So was this just another of my most anticipated films that was disappointing?

I am gonna first give the most simplistic description of the plot I can.  A group of girls band together to try to escape out of a psychiatric  thats is run by an evil orderly.  The rest of the story can be picked apart pretty easily.  There are many questions to be had and few answers.  I will be honest.  I don’t think this will find a mass audience.  Mainly because the film is all over the place. I don’t think audiences will get it.

There were elements I loved though.  The opening ten minutes features absolutely no dialogue and involves a great song to compliment the visuals that tells us how our main girl got to the insane asylum.  Also, there are four great sequences that have been showcased in the trailers the most.  These fantasy sequences that have the girls fighting to get items for their escape provide great music, action, and visuals.  But I like these sequences on their own.  Had Snyder released these as short films, I would have been crazy about them.

My final stance is that SUCKER PUNCH is a great showcase of short films.  But it is not a good film.  And while it is a film meant to be seen on the big screen with the beautiful visuals that it provides, I can not recommend that anyone spend their hard earned $10 to see this.  If you love the trailer, then I am sure you are gonna see it regardless of what I say.  If you have any reservations then just wait til the DVD release.

I’m o / 3 on most anticipated films of the year.  X-MEN: FIRST CLASS  is next on the list.