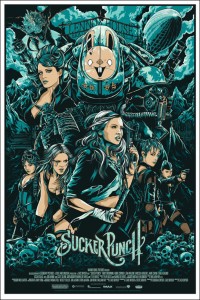 Sucker Punch will have you wondering “why should I care” as you watch Zack Snyder’s beautiful film unfold, only to confound and confuse even further as it simultaneously saves the film from being narratively pointless in the end.

That above sentence doesn’t seem to be high praise, but the more I think and talk about this film the more I find myself liking it.  The film follows a young girl, Baby Doll, as she is wrongfully committed to a female institution for the mentally insane.  The film’s set up is fantastic and we are quickly thrust into Baby Doll’s fantasy world as she finds herself on the wrong end of a lobotomy.  Now, I know that last bit sounds spoilery but we get to that point fifteen minutes in so don’t worry.  In Baby Doll’s fantasy all the girls at the institution are still prisoners of their surroundings but instead are living in a gentlemen’s club/brothel of some sort.  The girls in the fantasy world plot an attempt to get out of this prison and must retrieve four objects to do so.  So where do all of those crazy action set pieces you keep seeing in the commercials come into play?  Those would be Baby Doll’s fantasies, inside the existing fantasy, that she has when she and the girls (Sweet Pea, Blondie, Rocket, and Amber) are attempting to get the items they need for escape.  That’s right, a dream within a dream.

That was a lot of plot synopsis, sorry for that, but I feel like the more you know what you are getting into the more the film can be enjoyed.  But the whole dream inside a dream thing is why I mentioned “why should I care” in the opening of my review.  There was more than one occasion early on in this film where I was telling myself, this film is awful because nothing matters; there are no stakes.  I even found myself saying, “Well I see why Snyder hasn’t done an original film until now,” the film gets so seemingly off track once you dive into Baby Doll’s head. The girls can’t die for real in the action set pieces because it is in Baby Doll’s head. Even as we find that the set pieces are mirroring what is happening inside the brothel there are still no stakes because that world is fantasy too.  So why should we care? The film does validate itself a bit in the end, but why leave the viewer to ponder why they should care about what is happening on the screen like Snyder does?  The validation itself is too vague though and leaves a lot to be questioned, but I am pretty well convinced this was Snyder’s intention.

The film is a dark and messed up tale with a lot of twisted and disturbing themes running under the current of the film.  Sure it is comprised of a series of giant action scenes but the film deals with misogyny, rape, wrongful imprisonment, violence towards women, torture, child murder, forced prostitution, murder, and I am sure more.  The film barely breaks to make you smile and even though it is PG-13 pulls few punches.  Even weirder is that the film, while carrying all the above characteristics towards women, is possibly the biggest and most epic girl power film ever made.  But you could just as easily argue that it is a film made for teenage boys, a manifestation of their wildest fantasies. It is a bizarre and unique film and I have no idea who it is made for.

All of this said, I think I really enjoyed the movie.  There is so much going on that is ripe for conversation and while that might come at the expense of how well the plot holds up it opens the film up for a lot of interpretation.  Beyond this the film is gorgeous and wonderfully shot buy Zack Snyder and his team.  From the action choreography, to some fantastic single takes, or the perfectly executed stylized effects, the film is a visual marvel.  You truly could enjoy the film without the sound.  I will take some reservations with Snyder’s choice to cover some classic songs to varying degrees of success, ‘Where Is My Mind’ by The Pixies is the most brutalized here with Emily Browning’s cover of ‘Sweet Dreams’ working perfectly with the opening scene, but it could have been a lot worse.

I cannot comment enough about the visual work on display here though, Snyder goes for broke.  From the set designs, the action dream worlds, the skimpy costume design, the character designs of all the creatures, Snyder’s film has a lot of bold and interesting choices going on.  It’s a couple of single takes that really steal the show though. One is a subtle conversation scene around a set of mirrors backstage at ‘the theater’ that is just fantastic. The other is a CGI spectacle as three of the ladies fight a bunch of robots on a train and the camera goes everywhere and captures the action beautifully.  I am sure both of these takes implemented some digital trickery, the train sequence for sure, but the execution is so strong I could care less; it’s also par for the course nowadays I feel.  The film is a visual feast that can’t be denied by even the film’s harshest critics, so much so that it is almost worth seeing for the visuals alone.

The acting in the film gets the job done with no one rising that far above or below the pack and the ensemble keeps the film moving forward.  Emily Browning leads the film with a less is more approach.  She is sexy and handles the action very well and while she doesn’t have A+ acting chops, she gets the job done.  Abbie Cornish is probably the best of the ladies in the film and along with Jena Malone the two anchor the emotional connection to the film.  I think a second time through with the film will reveal their performances to be stronger knowing what is actually going on with the film.  Vanessa Hudgens and Jamie Chung get the lesser roles of the girls but they both are solid enough in their roles and nail the action pieces.  Oscar Isaac does the best work in the film as Blue, the villain of the picture, and he steals just about every scene he is in and is an excellent antagonist that makes the fantasy compelling. Scott Glen’s character is pure exposition and while he does a fine enough job, his part is completely useless.  Jon Hamm and Carla Gugino round out the rest of the ensemble and while neither have big parts, they make the most of their moments.

In the end, Sucker Punch seems to have a lot of flaws but I think the film just has a lot of layers for you to dig into.  Sure it might not lead to all the answers you are looking for but Zack Snyder’s film is ripe for conversation as there is a lot going on underneath the surface here.  If you want to see sexy girls shooting shit and pulling off some crazy action beats then you can enjoy it for that but I think the film is not just a vapid shell of an action film.  There are a lot of dark and disturbing ideas here that give the film some depth.  I look forward to seeing the film again and I hope that the film peels back even further upon itself to show more of what it’s hiding inside.