Normally, I keep my entries and sports posts on here rather light, hopefully somewhat informative with a little bit of levity here. But on the rare occasions something arises that deserves a serious light shed on it, I tend to dispense with the jocularity.

I read a post today by a gentleman named Murray Chass. He’s a prolific writer who once wrote for the New York Times and in 2003 received the J.G. Taylor Spink Award, presented annually to one baseball writer. The St. Louis Post-Dispatch’s Rick Hummel received this award a few years back. He should, ideally, know what he’s talking about. 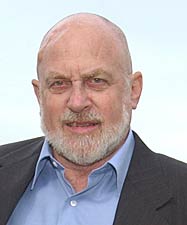 Obviously, this guy knows baseball better than anyone.

Apparently, he decided to take the polemical route with his most recent blog (I don’t care if he hates the term bloggers; his website is a blog). The title, “Musial No Man of Honor, Mr. President,” should give you an indication of what the topic is.

Chass’ assertations claim that Musial was a racist in his past, denying Curt Flood (a Cardinals teammate) and some other former teammates (who were all black) a chance to eat in Stan’s restaurant because of their race. When they asked why they were refused service, they were told because the owner instructed them not to let black people eat there. Chass also cites “a lawyer with no first-hand knowledge of the incident” in saying that Musial tried to lead a team boycott when the Cardinals were set to play against the Brooklyn Dodgers when Jackie Robinson broke the color barrier in 1947 (although Miller does admit he’s never heard anything to support this claim). Murray also derides Stan for supposedly preventing players from receiving a pension plan if they had played in a Mexican league.

Nevermind the fact that, instead of staying in a separate hotel or house from his black teammates (which he had the right to do), he stayed in the same hotels as they.

Nevermind the fact that Willie Mays, perhaps the greatest all-round player to play the game, recounted the time on a flight to the All-Star game when Stan asked to play cards with the black players. When the players pointed out that others weren’t playing with them because of their race, Stan essentially said, “So?” and sat down with them.

Nevermind the fact that former black teammates such as Bob Gibson call Stan the nicest man in baseball. I’ll admit, I’ve never met Gibson, but based on his reputation, I don’t think he’d have a lot of kind words for a man he perceived as a racist who treated him condescendingly.

Nevermind the fact that Curt Flood’s son offered a differing account of what happened at the restaurant, calling Stan a good, decent, and honorable man.

This story is actually pretty well-known, and there are many different versions of what happened. According to some, Stan turned the family away because it was 12:30am, well past the time the kitchen remained open, and they wouldn’t have been able to serve them. Another story has it that Flood and his wife were turned away when Stan was not present; upon hearing what happened, Stan became upset and promised to fix it.

What actually happened? We may never really know.

I won’t address the whole Mexican league issue, because I really don’t know anything about it. What I do know is that Musial was part of a committee, he wasn’t necessarily the person who spearheaded the movement. Even if he were a part of it, he wasn’t the lone person responsible.

What I do know is that the story Chass wrote was related to him by Marvin Miller, the former executive director of the MLB Players Association. Miller, 93, has been on the last few veterans ballots for the Hall of Fame, but has been denied each time. Is it possible this snub, combined with the anecdote about Stan and the Mexican leagues, is what drove Miller to bring this up to Chass? Who knows.

I do also know that not once, but twice, in the last few months, Chass has had to revise past stories he’s written based on talks with Miller. First, he reported that Miller rebuked Jim Palmer, calling him a “union-hating sonuvabitch.” Peter Miller, Marvin’s son, had to clarify that Miller had not actually said it. Oops 1.

Then, later, he wrote about the fact that the Veterans Committee had again denied Miller an induction into the Hall of Fame, quoting Miller in his story, accusing Sports Illustrated writer Tom Verducci of not voting for him. He also took the time to take a few shots at Verducci: “I’m not sure what Verducci, the Sports Illustrated writer, thought of Miller, but I know he didn’t think much of the job Miller had. When Verducci covered baseball for Newsday, the Long Island daily, he hated covering baseball labor. And when he did cover it, he wasn’t very good at it.”

The Hall of Fame vote is considered confidential, and the committee asks its members not to reveal their vote. In this instance, however, Verducci, was allowed to defend himself, and he did so, revealing that he had, in fact, voted for Miller. Oops 2.

Perhaps Chass is simply writing to stick up for his friend Miller, which isn’t necessarily a bad thing. But doing so by smearing the reputation of others without justification runs counter to everything a writer…no, a PERSON, should stand for.

Like I said, we may never really know what actually happened nearly fifty years ago. But I know professional writing when I see it, and either Chass has, in his old age, lowered his standards for it, or the Baseball Writers Association of America really lowered its standards for a year when he won the award.

As for me, I’ll choose to believe Gibson, Mays (guys who probably know a little more about baseball than Chass), and virtually the rest of the planet who has personally interacted with Stan Musial. Chass criticizes Obama and his advisors for not doing their research for the Presidential Medal of Freedom, but given that it’s one of the two highest awards bestowed upon a civilian, I think they probably did a little more research than Chass appears to have done.