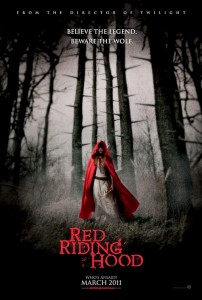 Let the Twilight-ification of our childhoods begin! Red Riding Hood has arrived. Amanda Seyfried stars as Valerie (aka Red Riding Hood). She lives in a vaguely medieval village that’s spent the last few generations being stalked by a werewolf. Currently however the township has arrived at a détente of sorts with the lycanthrope. In exchange for a percentage of their crops he will, in turn, refrain from killing them. (“Those are some real big eyes your grandmother has there…it’d be a shame if something happened to them.”) Of course, this accord raises several questions. Does the werewolf speak? (No.) Do the villagers speak werewolf? (Nope.) Does the werewolf have an agent for these sorts of deals? (Perhaps.) Just how much food does one werewolf need? (Apparently a lot.) Does this paragraph contain more than the maximum number of parenthesis allowed by law? (Most likely but it’s difficult for me to know where you’re actually reading this.)

Valerie is torn between to two equally bland yet perfectly coiffed young men played by Billy Burke and Shiloh Fernandez. The former is a nobleman who offers a life of comfort while the latter, a simple woodsman, offers a life of sexy but intense brooding. The film diverges from the original tale by making it a kind of murder mystery. Which one of our villagers is the werewolf? It’s a clever, though woefully executed, plot device designed to pad out what would otherwise be a five-minute story. After all, there is a reason these are bedtime stories – they’re short.

The film clocks in at 100 minutes but feels significantly longer. It spends the first hour trudging through a tiresome mystery while trying to figure out ways to be something other than a Twilight knockoff. Then, in the final half-hour, it abruptly abandons this haughty yet ineffectual attempt at originality only to embrace its inner-Bella. When the film attempts to incorporate any of the original fairy tale the result, more often than not, is cringe worthy and induced unintended laughter from the audience. While the film does finally achieve a modicum of momentum in the final twenty-minutes it’s completely lacking in originality. In the end, all that can be said about this yawn-inducing exercise is that it’s still effective as a bedtime story.

That’s not intended as a compliment.

On a scale of 1 to 10, with 10 being Red Hot Riding Hood and 1 being The Cartoon Adventures of Teen Wolf, Red Riding Hood gets a 3.