As we look forward to 2011, well, it’s pretty tough to make a prediction. A month or so ago, the Cardinals looked to be the favorites to win the Central. Unfortunately, Murphy’s Law found its way to Jupiter. The Cardinals still have a fighting chance, but after the fission of Wainwright’s tendon, the odds are a little less favorable.

As we count down the days until Opening Day, I’ll be going around the horn and previewing each position for the Cardinals. Obviously, some spots are still up in the air, but I’ll do my best. First up, catchers.

Once again the stalwart behind the plate, Yadier struggled a little bit with the bat in his hands, but he was as good as ever defensively, garnering his third consecutive Gold Glove. He led the majors in caught stealing percentage, nabbing 33 of 68 potential basestealers, good enough for 49%. In the offseason, he also gives wardrobe advice. 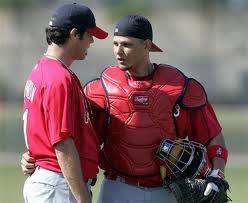 Yadier’s established himself as the premier defender in the game behind the plate and was named to the All-Star game for the second straight year. His offense took a bit of a dip, but he also seems to come up with timely hits when needed. His defense is his moneymaker, though; anything he does at the plate is almost a bonus. If he can return to his 2008-09 form at the plate, all the better.

For the last three years, the Cardinals depended on Jason LaRue whenever Yadier needed a rest. LaRue was an adequate defender, but he was brought on more for the pop in his bat, having hit 12 or more home runs in five consecutive seasons. After a nasty kick to the head in Cincinnati, however, LaRue suffered the effects of post-concussion syndrome and was forced into an early retirement. A shame, considering he was the owner of perhaps the best mustache in baseball.

In the offseason, John Mozeliak insisted he was going to go after a similar catcher with offensive potential, but the Cardinals ended up signing Laird, who spent the last two seasons in Detroit.

Laird is a liability at the plat. 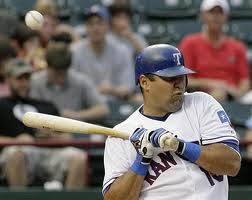 The plan appears to be to give Molina a little more rest than he’s had in the last few years, perhaps 120-125 games. This will hopefully keep Yadier’s legs fresh should the Cardinals make the playoffs. Even if they don’t, the Cardinals appear to be planning for the future as well, as the exertion of squatting over a hundred times a night takes its toll on one’s knees.

I feel there’s a joke to be made here, but I’ll refrain.

If there is any prospect in the Cardinals’ system to be called up should Yadier or Laird get injured, it’ll most likely be Bryan Anderson. Anderson’s hit consistently well in the minors, hitting at a .294 clip, and in limited action with the Cardinals last year, he hit .281. His defense is still a work in progress, but he has gotten better. Tony Cruz will be the other catcher at Memphis, most likely, now that Matt Pagnozzi is with the Colorado organization.

Beyond that, Steven Hill presents an intriguing power bat at AA. He batted three times for the Cardinals last year. His only hit was a home run. He hit a combined 24 home runs last year with Springfield and Memphis, and his defense was adequate. With some more experience under his belt, he could be an interesting option down the road.

In other Cardinals news, Marty Marion, known as Slats or the Octopus, passed away Tuesday evening. Marion was a key member of the Cardinals in the 1940’s, when the Birds went to four World Series, winning three of them. Marion was never a truly feared hitter, but his defensive prowess at shortstop was well-known. In the 1943 World Series against the Yankees, he hit .357 in a losing cause, and he was named to seven consecutive All-Star games (there was no All-Star game in 1945 due to World War II). He won the National League MVP in 1944, and he was revered by his teammates. Marion was 93. Godspeed, Marty.