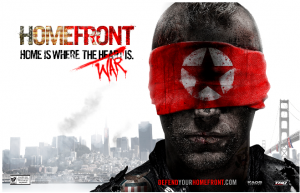 With the rise of cinematic video games it isn’t a mystery why Homefront has garnered so much buzz. Advertised as “from the writer of Red Dawn and Apocalypse Now”, St. Louis native and Oscar nominee John Milius takes the helm of this story about a potential future in which Korea becomes the new world power and attempts to colonize America. Unfortunately, this interesting story isn’t enough to keep an otherwise pedestrian game from being anything other than ordinary.

The story starts as your character is freed from a Korean caravan by American resistance forces. You predictably join their ragtag team of misfits to overthrow the insurgent Korean army. This is where the trouble starts; the mechanics of the game are simply awful. The entire game will have you waiting on your teammates to pass through doors, climb up ladders and meet at rendezvous points. And what is the payoff of all this trouble? Not much. The story plays out exactly as you’d imagine except with dialogue and voice acting that is so over the top and melodramatic you’d think a SyFy Channel writer was responsible and not the writer of Apocalypse Now and Clear and Present Danger.

While this game is not perfect by any means, it somehow manages to be fun. Even in spite of blatant product placement and countless rip offs of other, better games, Homefront does two things well. First, the actual shooting mechanics are pretty solid. Guns feel, sound and handle differently and aiming is thankfully well executed. The other thing it does right is the environment. Homefront will have you fighting in subdivisions, stores, fields and other domestic landscapes. While the graphics that showcase these environments aren’t all that spectacular, the feel of warring in the suburbs works for the story.

Perhaps the best news is that even if you don’t particularly like Homefront, it will only take about 4-5 hours out of your life. This incredibly short campaign will keep you from rolling your eyes at the ridiculous “war-talk” too much and allow you to feel the satisfaction of beating the game in no time.

What’s your favorite story in a videogame? Let us know below.