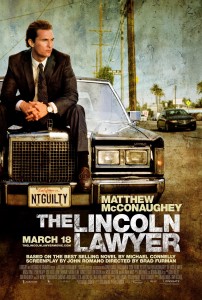 It’s been a while since we’ve seen a good courtroom drama. The closest thing was “Conviction” last year, but that centered more around the main character becoming an attorney. In “The Lincoln Lawyer,” Matthew McConaughey plays a defense lawyer that is hard not to like. The same can be said about the film.

Mick Haller (McConaughey) is a smooth talking, money loving criminal defense attorney who’s office resides in the back of his Lincoln town car. His clients know that he is the best at what he does, and many of them are return customers for Haller. But little does he know that he is about to get a new client that will turn his world upside-down. When his bail bondsman friend (John Leguizamo) refers him to Louis Roulet (Ryan Phillippe), a rich-boy who is accused of rape and attempted murder, a seemingly harmless case turns into Haller’s worst nightmare.

Going into the film, I wasn’t quite sure what to expect. McConaughey has mostly stayed away from serious roles for quite some time now, so I wasn’t sure he would be able to pull off the lead in a dramatic role. But much to my surprise, any doubts I once had were gone soon after the start of the movie. The film has a unique feel to it; it takes on an independent, artistic look while still reflecting that it had some sort of substantial budget to work with. There is a good mix of humor, of course mainly coming from McConaughey, along with some great drama and action.

As I mentioned earlier, McConaughey does a great job in the lead role. This film reminds us how good of an actor he can be, and takes me back to his performance in “A Time to Kill.” Although there is a lot more levity in this film, there are plenty of serious moments that he nails. Ryan Phillippe plays his client in the film. He does a good job of staying ambiguous; the audience is pretty much guessing weather he is guilty or innocent for most of the film. William H. Macy plays Haller’s private investigator and pretty much best friend. He steals almost every scene that he is in, and is stellar as usual. Marisa Tomei plays Haller’s ex, and mother of their daughter, who happens to be a prosecutor. We learn that it is one of the reasons that they aren’t together. The chemistry between the two works well, as well as the animosity they share with one another.

Overall, “The Lincoln Lawyer” is a compelling film with enough action to keep things entertaining. The movie is a home run for director Brad Furman, which is sure to get him some big projects in the near future. Whether or not you are a fan of movies about the legal system, this is a film that most anyone can enjoy. The acting is great, and at times gets pretty intense. It’s definitely a pleasant surprise early on in the year.

“The Lincoln Lawyer” is an A