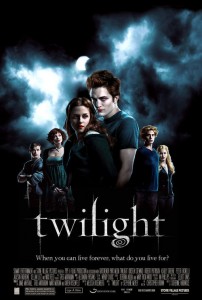 If you’re a teenage girl you’re only reading this to be told what you want to hear. So here it goes, Twilight is the best movie ever made. It’s so spectacular that Hollywood has decided to cease making films (not counting Twilight sequels, of course). Since all other films committed to celluloid would pale in comparison, what would be the point? Hollywood has collectively decided to leave well enough alone.

Now, for everyone else…

Twilight is based on an enormously popular series of books. (Apparently when tweens are done with Harry Potter, the boys move on to Artemis Fowl and the girls move on to this.) I’ve read none of the books so I won’t pretend to know if they’re any good. But I sure hope there better than this. Twilight tells the story of Bella Swan (played by Kristen Stewart). Bella comes from a divorced home and decides to move in with her dad who lives in the town of Forks, Washington (apparently chosen for its huge amount of rainfall and, therefore, large amount of sun-blocking cloud cover). We’re told Forks has a population of 3,120, half of which are apparently still in high-school. But I guess that makes sense if the town is populated by ageless vampires.

What’s striking about Bella is how unlike most protagonists she is. Sure, her parents are divorced, but both seem to be concerned, loving and involved in her life. And she’s moved to a new town but she’s certainly no outcast. Far from it; she has a new group of friends within the first two hours of arriving at school. For a movie about vampires, I must admit that I expected a great deal more teen angst. Bella is remarkably well adjusted.

While it’s admittedly refreshing to see filmdom depict a teenager that’s something other than full of pity and self-loathing, it makes her falling in love with a vampire all the more mystifying. Why would such a pretty, well-adjusted girl, who upon arriving in town immediately has three guys crushing on her, fall for a vampire? Especially a vampire that openly admits he is driven to kill her and drink her blood? Her vampire du jour is Edward Cullen (rhymes with “sullen”) played by teen idol du jour Robert Pattinson. So what’s his secret? Does he woo her with poetry? No. Flowers? Nope. Sweet talk? Nuh-uh. He doesn’t even make her a mix tape. Basically, he runs from the room every time she comes anywhere near him and tells her he wants to kill her but he’s trying really hard not to. (Apparently Chris Rock was correct; the difference between hitting on a woman and sexual harassment is how attractive you are.)

Edward is 114 years old but still attends high school in order to maintain his cover. (I gather home schooling hasn’t made its way to Forks.) Once you get past the threats of homicide, Edward’s self-esteem shattering treatment of Bella and statutory rape (what does a 114-year old have in common with a 17-year old anyway) it’s just your average teenage love story. All these incongruities could make for a great story, just not a great love story. The movie clearly wants us to root for Edward’s and Bella’s relationship. But it doesn’t give us much of a reason other than the fact that Bella wants it and Edward is dreamy.

There are some interesting moments with the Cullen clan. They don’t kill humans and live off the blood of wildlife. Seeing their home life is humorous without undermining the film’s central conceit. Even funnier are some of the films effects. For such a high-profile film, they should have been much better. There are scenes of Edward running super fast that look like something out of Superman IV. (And speaking of Superman, there’s a scene where Edward shows Bella the Washington landscape from atop trees that’s lifted directly from Superman’s legendary scene where Lois falls in love with Superman as they fly over New York.)

Vampires have always been a metaphor for sexual awakening. Twilight is no different. The hook here is that Edward loves his potential snack so much that he refuses to consume her. (Do vampires have purity rings?) But were given no real reason for his love of her other than that her blood smells good. (Which I guess means one week a month she must smell great.) Additionally, we’re lead to believe that there is a direct correlation between how much a vampire is attracted to someone and the strength of their compulsion to kill them. As far as metaphors go, that’s a pretty creepy one; especially in light of the fact that this franchise is targeted at teen girls. It makes me wonder if we’re creating a generation of women that will stay in abusive relationships because they’ve mistaken desire for violence with plain old desire.

For a vampire movie, there’s surprisingly little in the way of vampire action. It’s almost all yearning and anguish. What little action we get comes in the last forty minutes when some other vampires that are passing through town (as vampires are wont to do) decide to attack Bella and our vampire family decides to come to the rescue. Twilight is for people too old for Goosebumps and too young for Anne Rice. As a bridge, I guess it works nicely but for the rest of us, we’ve seen it done better.

On a scale of 1 to 10, with 10 being Interview With A Vampire and 1 being Vampire In Brooklyn, Twilight gets a 6.