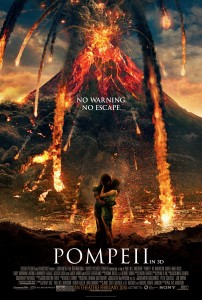 Mince a large cut “Titanic”, without the emotional resonance, tenderize a hunk of “Gladiator”, leaving out all that pesky action and visual pizazz, then season liberally with “Conan The Barbarian”, being sure to leave out most of the gore, throw them all together and bake. Ta-da, you have “Pompeii” – a movie that couldn’t be any cheesier if Vesuvius erupted and covered the ill-fated city in cheddar.

Directed by Paul W.S. Anderson, “Pompeii” attempts to build a story of ill-fated, star-crossed lovers amidst catastrophic tragedy in much the same way that James Cameron did with “Titanic”. Sadly, held up to “Titanic” – which does have some shortcomings in hindsight, like many of Cameron’s films – “Pompeii” is about as dramatic as pile of old hotel box springs in the city dump.

Super-buff and perpetually shiny Celt slave Milo (Kit Harington, “Game of Thrones”) catches the eye of the beautiful and privileged Cassia (Emily Browning, “Sucker Punch”) after playing sympathetic horse whisperer to her injured animal and drama ensues. They stare at each other from across the room – or arena, as he’s a ruthless gladiator dripping in blood which, in turn, makes him even shinier and dreamier – while that fun spoiling Roman, Corvus (played by Kiefer Sutherland, testing out a revolving door of accents, and missing only a handlebar mustache to twirl) cuts in on the action. Rounding out the cast of wildly mismatched accents are Jared Harris (“Sherlock Holmes: A Game of Shadows”), Carrie-Anne Moss (the Matrix trilogy) and Adewale Akinnuoye-Agbaje (“Lost”). Oh, there’s also a giant-ass volcano that’s about to blow.

Anyway, Jon Snow wants to get even with Jack Bauer, who killed his family and his people, but he also wants to be with Babydoll. Babydoll’s parents, Moriarty and Trinity, are trapped between their love for their daughter and their duty to Pompeii. Mr. Eko’s in it, too. He’s like a super gladiator. But look out! That volcano is gonna blow, and we just know it! And when things are about to get really dramatic, we’re going to make those moments slo-mo, for maximum drama!

This synopsis, while glib, is what this movie deserves. I suppose if I had been watching this movie on SyFy or Discovery Channel, I could be inclined to give it a pass. But I would have been planted on the couch, wearing my Star Wars flannels and snarking at the screen like the star of my own subpar MST3K. Actually, that might be the proper way to enjoy this cheesefest.

Pompeii is just silliness… I rolled my eyes so much, I gave myself vertigo.