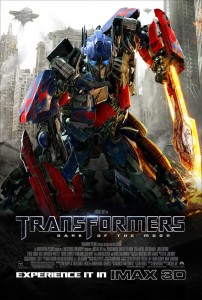 After the atrocity that was Transformers 2: Revenge of the Fallen, I lost most of my hope in the ‘Transformers’ movie franchise. I have been a fan of the series ever since Generation 1 when I was a kid. Those cartoons will always have a special place in my heart, and it is because of them that I was so excited to see one of my favorite series come to the big screen. Needless to say I was very disappointed to see the second film go so bad, and I was ready to throw in the towel. Fortunately, ‘Dark of the Moon’ was just what the series needed to survive.

Sam Witwicky (Shia LaBeouf) is your average twenty something. His girlfriend has broken up with him; he can’t land a job after college; he’s saved the world twice. Well, aside from that last fact, his life is pretty normal. Luckily for him he seems to be a magnet for beautiful women, despite his lack of funds or position. Enter his live-in girlfriend Carly Miller (Rosie Huntington-Whiteley). Sam wants nothing more than to matter, and it seems like his life is going nowhere. While his friends the Autobots are out assisting the government, he is out pushing a mail cart. That is until the evil Decepticons unravel a plan that threatens to destroy Earth as we know it. Sam goes to the government and tries to convince them to let him help. Although he gets blown off time and time again, Optimus Prime and the Autobots know his potential and team up with him to once again save the planet.

First of all, let’s quickly recap all of the things that made ‘Transformers 2’ so terrible: Sam’s parents, the twins, awful close-up action that was nearly impossible to offer, and a terrible script. That is just to name a handful. Now for how Transformers: Dark of the Moon fixed things. First of all, relative to the last film, none of the annoying characters seemed so bad. I know that isn’t enough to merit a great movie, but believe me – it made a huge difference. Sure, the parents are back – but they aren’t nearly as obnoxious as they have been in the past. The stereotypical, jive-talking twin robots were completely scrapped – so that in itself was great. And I’m not saying that this movie will win any Oscars for best screenplay, but at least they decided not to try and cram a bunch of ridiculous dialogue down our throats. But the absolute best improvement that Michael Bay made with this film was the action. It is a complete 180 from the last movie, where the action shots basically incomprehensible.

In the past I have not been a big believer in 3D. I am really against the cash grab that the entire technology in movies has been thus far. So that, combined with my expectations after ‘Revenge of the Fallen,’ did not leave me with a very good feeling going into the third film. But I am happy to report that Transformers: Dark of the Moon is one of the best examples of 3D that I have seen since Avatar. This is the way films were meant to be made in 3D, where they have enough depth to add to the experience without becoming distracting. The special effects, courtesy of Industrial Light and Magic, may have been the best that I have ever seen. The CGI blends in so discretely with the live action, that it is hard to tell what is real, and what is fake. Most of the destruction happens in Chicago, and at times you feel like Bay was really downtown blowing up buildings for the film. With that being said, the 3D made for a lot of fun during all of the action.

Shia LaBeouf is as charismatic as ever in this third film as Sam Witwicky. I have been a fan of his for a long time, and I don’t think he is going away anytime soon. He plays a likable character and is extremely relate-able as an everyman. His chemistry with newcomer and Victoria’s Secret model Rosie Huntington-Whiteley is fantastic – and frankly much better than it was with Megan Fox. Her character is easily forgotten, and is written out of the movie right from the get-go. Josh Duhamel gets more screen time in this film than before, and John Turturro’s character is toned down quite a bit. Alan Tudyk, who is always amazing, plays Simmons’ hacker assistant – and is awesome. Patrick Dempsey and John Malkovich make great additions to the film as well, and Ken Jeong has one of the tamest characters I’ve seen him play. Peter Cullen returns to voice Optimus Prime, and Leonard Nimoy is Sentinel Prime – both of which are superb.

Summer of 2011 has been great for movies. But if you are still waiting for the first big action-packed blockbuster to hit – this is it. Transformers: Dark of the Moon is filled with everything an action-buff loves, and it’s a whole lot of fun. The special effects are incredible, and the 3D is surprisingly useful during the all of the excitement. There is no doubt that Michael Bay has an eye for making things look spectacular, and that is just what he does here. Although the movie runs a little long, the last non-stop hour of the movie makes up for any lag in the beginning. This is the best ‘Transformers’ movie yet, and I am ready for part 4 already.

‘Transformers: Dark of the Moon’ is a B