Has it really been 15 years since the original Men in Black hit theaters? Thirteen-year-old me joyfully went to the theater three different times that summer to catch the film. I was in love with everything about the film, the quirky direction, the over the top comedy, the top notch cast, and most of all the series mythology. There weren’t many kids my age who weren’t nodding their heads along to Will Smith’s “Men in Black” single who didn’t think they could also pull off a black pair of ray bans, and an impeccably tailored black suit.  Unfortunately, 5 years later, a sequel came out that tarnished my view of the original film, and made me cynical about the whole franchise. The sequel seemed like a cheap Chinese knockoff of the film I had loved five years earlier, very similar on the surface, but none of the working parts were comparable. So, I went into Men in Black 3 doubtful, and to my surprise I enjoyed it. (With caveats, of course.) 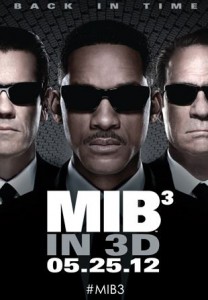 Men in Black 3 takes place 14 years after Agent Kay (Tommy Lee Jones) recruits Agent Jay (Will Smith) into a shadowy government agency, only known as the Men in Black, which oversees alien life in and around Earth.  Despite the two having been partners for almost a decade and a half, the two still don’t quite see eye to eye.  After a breakout of a maximum security prison on the surface of the moon, Jay finds out that Kay hasn’t been completely honest with him, and there are still many things he does not know.  Unfortunately for them both, their tiff is interpreted by the escaped convict, Boris the Animal (Jemaine Clement), who has a special type of hatred for Kay. Boris promises to go back in time to kill Kay before he can ever shoot off his arm, and deploy the ArcNet that protects the Earth from alien invasion. To keep this possible future from coming true, Jay must travel back in time to save his best friend and partner.

Anytime a film employs time travel as a plot device, things get a bit messy. As humans we are very linear thinkers, and twisting timelines is not something our brains are used to comprehending. However, when done right, it can make for a very entertaining film. The problem is that Men in Black 3 does not do it right, in fact they make it downright confusing at times. It’s merely a cheap device to move the story to where they want it.  The rules they create for the time travel at the beginning of the film are completely disregarded by the end. Even at a quick glance, it doesn’t make sense. If you dive down deeper into it, it gets worse.

There is a saving grace though, the time travel is merely a device to make Jay a fish out of water character, and expose him to a younger version of his partner, Agent Kay (Josh Brolin). The two have great chemistry, and the new dynamic creates fresh circumstances and new attempts at humor. Does it still rehash some of the bits from the previous films? Yeah, but luckily the change of scenery really benefits the overall dynamic of the series.

Helping bring a bit of fresh air to the series is Griffin (Michael Stuhlbarg), a fifth-dimensional being, who holds the key to Earth’s protection.  Stuhlbarg has a deft comedic touch as the oddball alien, who gives the story an extra bit of wonder. He fits perfectly with Smith’s wise cracking agent, and Brolin’s stoic demeanor. Brolin should be mentioned as well for his dead panned delivery and incredible mimicking of the older Tommy Lee Jones. Not sure there is a better choice for the role.

The film isn’t everything I hoped it would be and more, but it is a significant improvement over Men in Black 2. Despite the fact that the plot is a bit of a mess,  the film is ultimately held together by a cast and a script that contains plenty of charm to spare. It might not reach the heights of the original, but it does make for a solid night at the cinema.