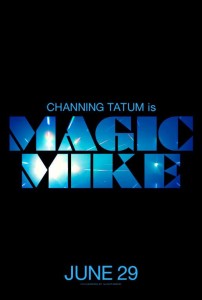 According to many, my man card has been revoked. Why? When asked what I thought of Magic Mike, my response was, “It was actually pretty good.” Trust me, it surprised me as much as it surprised any of you.

Magic Mike dives us into the world of male stripping (a sentence I never thought I would type), and follows the title character Mike (Channing Tatum) as he takes a young man by the name of Adam under his wing. Under his tutelage, Adam becomes a hot commodity at the strip joint Mike is a top draw at, performing under the name of ‘The Kid’. Mike isn’t your normal stripper though, during the day he does roofing, has a detailing business, and most importantly he is a designer of one of a kind furniture pieces. We follow Mike and Kid through their journeys in the debauchery filled world of stripping, as they deal with women, awful managers, and drugs.

The story has a surprising amount of depth for something that looks to be merely an attraction to Tatum’s many female fans. Soderbergh gets top performances from many of his top acts, and even gets Tatum to carry the story well. I’ve been hesitant to praise Tatum in the past, but he’s had bright spots throughout a career that suggest a personality beyond that of just being a pretty face and abs. Isn’t it a bit strange that the film where the draw is just that is his best acted film to date? He has an effortless charisma, and his real world experience of stripping before he became famous lends an air of authenticity.

Pettyfer claims the most amount of screen time to Tatum, and despite not looking the age of his 19-year-old character, has a wide eyed innocence that makes the performance much more believable. That innocence is also what drives the character in to a believable spiral throughout the rest of the film.

The only other true standout of the cast is Matthew McConaughey, who hams it up as the owner of the Tampa strip club which is the main setting for the film. It almost feels as if Soderbergh is having a bit of fun at McConaughey’s expense as his “Alright, alright, alright…” which has become somewhat of a catchphrase is used excessively throughout the film. The addition of a scene where his character plays bongos on the stage seems to be another tip of the hat to the actor. McConaughey captures just the right amount of sleeze you’d expect from a strip club owner.

The rest of the cast is serviceable without much screen time. The only true weak link is relative newcomer, Cody Horn, who seems to have graduated from the Kristen Stewart school of acting. She may not be as bad as Stewart, but next to the other boisterous characters in the film, she comes off as boring and unappealing.

Soderbergh created beautiful photography for a film that one would expect to have blockbuster style visuals. The feel of it is much more similar to an indie flick with well thought out cinematography, rather than lens flares as the dancers take the stage.

Most men won’t see Magic Mike due to the fact that it focuses so much on the male sexuality rather than the female sexuality that has been explored so often in cinema. There is no huge insight into the way men work, but if you like a movie with female nudity, you’d be a bit of a hypocrite for not allowing the fairer sex their turn. You’ll be surprised though to go and find yourself caring about the characters on the screen and their journeys.

The biggest complaint of the movie was the length, at just around two hours, Magic Mike seems a bit long. With maybe another twenty minutes left on the cutting floor it could have been something real special.