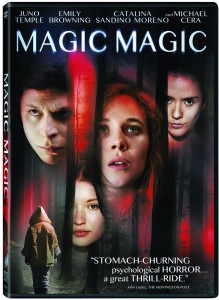 Horror fans often feel jaded that there’s nothing new to see. There are only so many ways to kill a character or instill fear. Magic Magic attempts to toe the line between horror and psychological thriller in a way that audiences don’t normally see. In lieu of knives, serial killers or demons were provided with anxiety, psychosis and paranoia. Magic Magic takes the mundane and makes it terrifying as we follow Juno Temple’s “Alicia” to Chile.

The film begins as Alicia arrives in Chile to vacation with her cousin “Sara”, played by Sucker Punch’s Emily Browning. They’re joined by Sara’s boyfriend and friends (including Michael Cera) as they venture into the Chilean countryside. Shortly after arriving Sara must return home and in doing so leaves Alicia alone with them.

Magic Magic understands the power of social anxiety. Juno Temple is able to embody these emotions like few others can in this Oscar worthy performance. Michael Cera also stands out as one of the creepiest characters since Buffalo Bill, “Brink”. The film’s primary tension comes as a result of Alicia’s inability to cope with her new surroundings and the people she is left with.

Magic Magic will not be for everyone. It is certainly a slow burn and requires your full attention. It’s less narrative driven than most Hollywood films, but what it lacks in plot it makes up for in atmosphere. Writer/Director Sebastián Silva clearly has an eye for mood and tone. This film is extremely unsettling and has something to say about the fragility of the human spirit and survival of the fittest.

Ultimately I recommend this movie to those who like independent horror, psychological films and/or Juno Temple and Michael Cera. Bonus points if you’re ok with films that aren’t tied up in a neat bow.