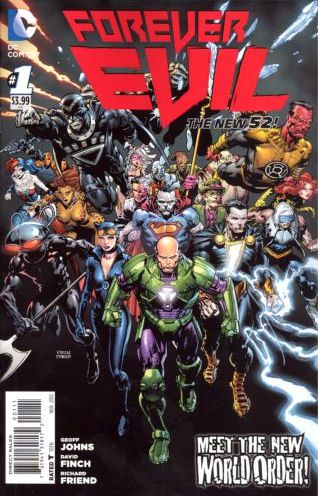 It only took DC two years of the New 52 before they decided that they needed a company wide  crossover.  I give them credit for lasting that long.

Spinning out of the events from “Trinity War” (a six issue story running through Justice League,  Justice of America, and Justice League Dark), we as readers are introduced to the New 52 version  of the Crime Syndicate (an evil version of The Justice League).  The problem that I had with “Trinity  War” was that it the story was nothing more than a six part prologue to “Forever Evil”.  There was no  ending to “Trinity War”.  Rather it just led into “Forever Evil”.  If the prologue had enough legs to  warrant six parts, then the story it’s leading up to must have something massively entertaining  in  store for us right?

In Justice League #23, we learn that the man that’s been setting everything into motion throughout  all of Trinity War was the Earth 3 version of Alfred Pennyworth and he has brought the Crime  Syndicate to Earth 1. Forever Evil #1 picks up not long after Justice League #23. Rather than  showing us the fate of our heroes, Johns decides to let us use our imagination about what has  happened.  It’s an interesting choice, but it makes this book more accessible for those that haven’t read  Trinity War. Readers are able to hit the ground running without having to be bogged down by a lot of exposition.

The first order of business was the catch readers up on the “hero” of our story.  Lex Luthor.  Yes, that  Lex Luthor. Even though Lex is Superman’s number one villain, he’s barely been used by anyone on  the Superman writing team.  Is that because the writers were told to save him for this company wide  event?  Given what’s been happening with DC Editorial recently, I seriously doubt it.  One can only assume none of the writers could think of what to do wit him. John’s introduces Lex as a charming, genius, sociopathic business man with a hint of heroism.

Johns relishes the opportunity to play in the DC villain sandbox.  We get see everyone from the inmates of Arkham, Superman’s enemies, and (of course) Flash’s Rouge’s Gallery. The way Johns’ is able to work his way around the entire world of the DC Universe lends to scope of just how big this event could go.  He’s not just focusing on the main villains either.  He gives lines of dialogue everyone from Two-Face to Frost. It’s that attention to detail that could make this event better than its pre 52 predecessors.

Along with giving the smaller villains a little screen time, Johns also reimagines certain members of the Crime Syndicate.  For example,there’s a scene of Ultraman (Superman’s evil counterpart) finding Lex Luthor’s supply of Kryptonite.  Ultraman crushes is up, uses his heat vision to turn it into a smoke he can inhale.  He’s freebasing Kryptonite. 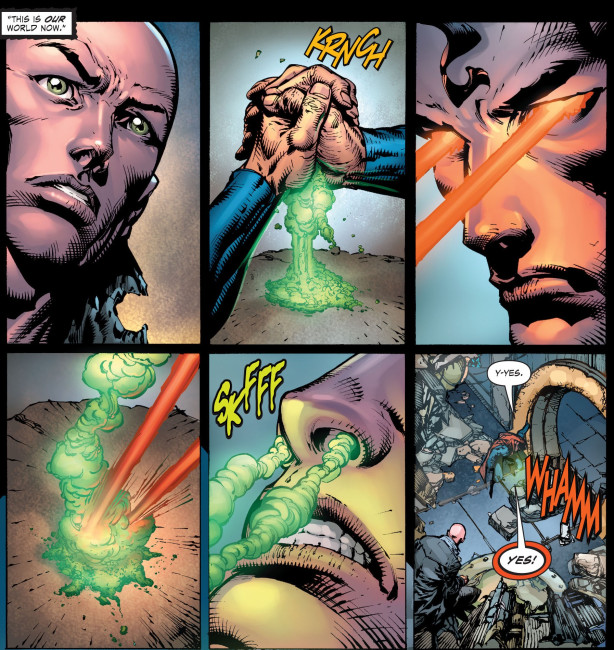 Of course, I can’t talk about this issue without talking about what happens at the end of the issue.  If you haven’t read your copy yet (or you haven’t checked the intent in last few days, don’t read click on the spoiler tab.  Superwoman (the Lois Lane of Earth 3) kidnaps Nightwing. When the Crime Syndicate makes their appearance known to the world, Superwoman reveals Nightwing’s true identity to the entire world (Dick Grayson; Batman’s first sidekick). What does this mean for the “Bat Family”? Only time will tell.  I do know that DC Editor Dan Didio, wanted to kill Nightwing during Infinite Crisis .  He elected to kill Superboy instead.

Now that the spoiler’s out of the way, let’s talk about David Finch’s art.  I know there are a lot of people who are fans of his art, but  his most recent work for DC has not been good.  It’s overly dark and the the use of heavy inks has brought the quality of his work way down.  With a story like Forever Evil, his style should fit perfectly into what they storytellers are trying to convey, but some of his character models are way off (his Nightwing looks like a boy rather than a twenty-something adult). Overall, his art was fine. It’s just not my favorite.  The other issue he might have is staying on schedule.  I know that Finch has a hard time keeping up with a monthly book and I feel like his art will suffer if he tries to stay on time.

This is a good start to something that has the potential to be really good and a lot of fun, which is something DC is sorely missing right now.  I just hope Johns and Finch are able to keep it up through seven issues.  Forever Evil #1 came out this past Wednesday.  You can still pick it up at your local comic shop (All American Collectibles @ 6933 Hampton Ave. 63109) or you can buy it digitally on the Comixology app for most ioS and Android devices.