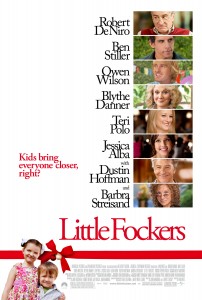 After six years of waiting Gaylord Focker (Ben Stiller) and company return to their awkward family dynamics. This time around the Focker kids are getting ready to enter kindergarten and Jack Byrnes (Robert DeNiro) is priming his son-in-law Gaylord “Greg” to take the reins of the Byrnes family clan. Shenanigans ensue as Greg tries to secretly wrangle the bizarre antics of a drug rep played cartoonishly by Jessica Alba. There are also subplots surrounding the Focker children trying to get into “the Harvard of Kindergartens” and the Owen Wilson character’s new age lifestyle.

While Little Fockers certainly has its moments to shine, the film as a whole seems to be nothing more than a re-hash of old material. Completely derivative of the jokes from previous films (i.e. using “Focker” as a euphemism for the real thing) it just doesn’t feel fresh anymore. For many comedies a contrived plot can be a necessary evil as long as it pays off with good jokes, Little Fockers misses the mark more than it hits it in this regard. A prime example is when Greg has the opportunity to earn a lot of extra money by peddling a Viagra-like medication that is safe for people with heart problems and for some half-assed reason Greg decides that he doesn’t want his father-in-law to know. So who cares that it was completely unnecessary to keep that information from his father-in-law, if that suspension of disbelief would have paid off in the end, it wouldn’t have mattered, but the fact that the entire film is basically centered around that one scene and that 90% of the jokes that come as a result of that plot device are visible from 100 feet away make it quite underwhelming.

The acting and the script seemed directed within an inch of their life. Very little felt natural in terms of dialogue, emotion or scenes. Top quality actors come across almost like cardboard as their struggle to believably portray these characters in unbelievable situations. (Keep an eye out for a scene involving a bathroom and a needle) Often in movies with less than stellar scripts and overly stellar casts you can almost see the actors give in and say “at least we can have fun doing this” but that is not the case in this movie. In recollection it doesn’t seem that any of the actors show any passion or conviction to play these roles. The characters have been developed and the story has been completed long before the release of this film.

Fans of the first two movies will find much of the same humor and much of the same jokes in Little Fockers. The film is funny at times and the audience during the screening seemed to laugh at the majority of the jokes, however for a team of such talented actors and filmmakers this attempt just seemed lazy.

-Worth somebody else’s money –