Movie Review: ‘Jack and Jill’ Went Up a Hill to Fetch a Pail of Money 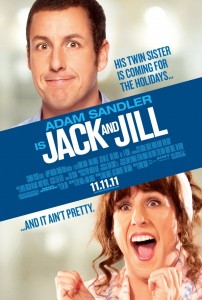 Let me tell you the story of a film.  A young writer wants to make it in Hollywood and writes a hilarious screenplay that he also feels represents him as a person.  He has a twin sister and wants the world to know what the relationship between two people, whose shared gooey womb has allowed them to create their own language only they can understand, is truly like.  By some miracle, he ends up in Adam Sandler’s office.  Sandler loves the idea, wants to make the movie and star in it, but what if—get this—he plays both roles.  Like, cross-dressing?  The young writer’s face falls, but he agrees to sell out as long as his name is found nowhere near the IMDB page.  The only remaining semblance of what was an intro that brings to mind When Harry Met Sally— interviews with various twin pairs documenting humorous anecdotes (St. Louis’s Sklar Brothers are sadly not included)—as well as a reference to the windmill, or ceiling fan, in Don Quixote that had a few geeks giggling.

The fictional scenario I’ve created above is a metaphor for the way Jack and Jill wants to make you think comedy is dead.  This film is merely Sandler’s newest attempt to make millions while simultaneously vacationing with his friends (this time it’s a cruise).  Sandler plays both Jack, a narcissistic, work-obsessed LA ad man with a huge house and adorable family, and Jill, an idiotic, abrasive unfortunate-looking woman with bigoted tendencies.  Jack is not happy when his twin comes to visit from Brooklyn, but he seems to be the only one, as his wife (Katie Holmes) and children, one adopted from India who loves taping things (inanimate and animate) to his body, seem to adore Jill, though they also seem to have had their personalities injected with botox.  Jill mostly spends her time sweating through her sheets in the guest room next to her pet bird, and plays the pity card to turn a four day trip into a stay through the holidays.  Meanwhile, Jack needs to convince Al Pacino to be in a Dunkin Donuts commercial—lucky (or unlucky) for him, Al falls for Jill.

A number of scenarios complicate this “plot” including but not limited to a Craigslist intimate encounters blind date featuring Norm MacDonald as Funbucket, a Lakers game with an appearance by Johnny Depp, and a birthday party displaying a few choice lines from Subway Jared.  Shaquille O’Neal, Drew Carey, Bruce Jenner.  I’m just name-dropping now, but they’re all there.  Pacino’s role ended up being larger than I anticipated; his scenes were almost enjoyable as he played the insane funny man to Sandler’s straight man (and woman).  In fact, he was downright earnest, putting even more of a spotlight on Sandler’s laziness as a performer.  This lackadaisical attitude permeates the entire film, from the haphazard editing to the barely-drawn supporting characters.

Possibly the only redeeming aspect of Jack and Jill is its family-friendliness.  With the exception of a little diarrhea behind closed doors, there is no gross out humor—it sticks to its PG rating.  In the same way that Jill appeals to Jack’s kids, I imagine she will appeal to children in the audience with her intense honesty, poutiness, and occasional pratfalls.  Unfortunately, this leaves the rest of us to play the role of Jack: exasperated and embarrassed to be in the same room with the woman.