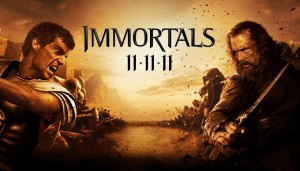 Many have tried to match the style of 300. Many of failed. Immortals may be the first film to not only match 300’s strengths, but also possibly exceed them.

Without giving too much away – Immortals is about Theseus, a mortal man who under the tutelage of Zeus leads a battle against the evil King Hyperion…and he is pretty damn evil. We know this story, it’s classic mythology and a perfect example of “The Hero’s Journey”. From Star Wars to Harry Potter, we’ve seen this all before…and it works every time.

Immortals is certainly not perfect, in fact it has several flaws. The main problem is that there’s really only about 30 minutes of story in this 2 hour movie. Considering that the last half hour consists of one giant battle, that still leaves about an hour of total downtime. The dialogue is often pretty weak and the pacing feels sloppy and muddled; and what is perhaps an attempt to build anticipation for the scattered action sequences becomes boring with a fairly aimless plot.

What ultimately makes the film work is its spectacle. This is eye candy in every sense of the word. Practically every shot in this movie is a work of art and that’s to be expected from the director of films like The Cell and The Fall. While 300 may have Immortals beat in terms of story and overall impact, the visuals in Immortals are hands-down better than 300. It is simply beautiful.

So if you’re a fan of big elaborate action scenes with tons of bad-ass kills and weapons, check out Immortals. If you’re a guy who wants to see this but can’t quite convince the lady, remind her that Henry Cavill (Superman) shows off more abs than The Situation…and check out Immortals. If you’re a girl trying to check out Henry Cavill, remind your guy that Freida Pinto and Isabel Lucas pretty much get naked…and go see Immortals. There’s something for everybody. Except the kids – don’t take them…it’s pretty gory.