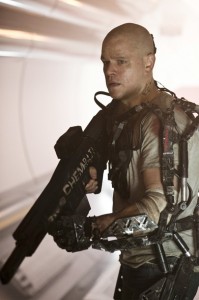 In 2009, I was told to see a movie called District 9. Not being a big fan of alien movies, I wasn’t all that interested in it. I walked away from the movie, having immensely enjoyed the film. Having heard that director Neill Blomkamp was directing the new film Elysium, I was pretty psyched to see it. I am happy to say that Blomkamp’s sophomore effort exceeded my previously high expectations.

Elysium is a social commentary, a science fiction masterpiece and an action juggernaut all rolled into one. Blomkamp’s film stars the reliable Matt Damon. After thinking about it, I can’t remember a film Damon has starred in that was bad. His films may not always make $100 million, but Damon’s films are always entertaining. Elysium is no different, as it grabs your attention from the start and never lets go.

The film is set in 2154. The earth has been ravaged by an apocalyptic event. The air is dirty and harmful to breathe. People on earth are poor and sickly. The wealthy, on the other hand, are living the life of luxury on a beautiful space station called Elysium. Damon plays Max, a former criminal, who is trying to make a living working at a plant building robots. Damon’s character is down to earth and very likeable. One thing that really impressed me was how convincing Damon was when he spoke Spanish. Max lives in what is left of Los Angeles. After suffering a life-threatening injury, Max has no other option but to get to Elysium to save his life, or he will die in five days. To make matters more difficult, Max has reconnected with childhood friend Frey, played by Alice Braga. Frey’s young daughter has leukemia and not long to live. Both Max and Frey long for a chance to get to Elysium, where every home is equipped with a machine that cures all illnesses. In order to get to Elysium, Max cuts a deal with Spider, played by Wagner Moura. Spider is the leader of a group of rebels on Earth. Before going to Elysium, Max is fitted with a type of metal armor that turns him into a walking computer. Spider has cut a deal with Max to send him to Elysium, but first Max must steal some important information from a millionaire played by William Fichtner. Jodie Foster also has a role in the film. Fans of Foster may be surprised at her villainous turn as Secretary of Defense Dellacourt. Foster’s character could have used more development, but she plays the character well, and is quite unlikeable in the film.

Another of Elysium’s strengths is the production design. Production designer Philip Ivey does a fantastic job in turning the earth into a depressing pit of despair. The film is beautifully shot. The special effects are some of the best I’ve seen in a while.

Blomkamp doesn’t shy away from using Elysium for some political commentary. The film has multiple political undertones including; immigration, health care policies and the division of the rich and poor. While there are parts of the film that could have been improved, the political undertones, Damon’s performance, and Blomkamp’s ability to tell an engaging story make Elysium easily the cream of the crop of this summer’s movies.

Elysium gets a grade of an A-