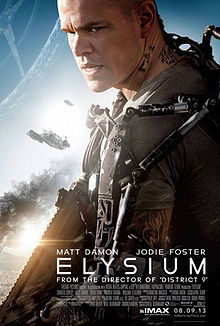 Unless you’re South African or were a huge fan of Nike’s Crab commercial, there was probably a pretty good chance that before 2009, you’d never heard of Neill Blomkamp. Hell, I still had to Google his name to make sure I spelled it right.

After the release of District 9 though, one of the biggest sleeper hits of the last decade, well, he…still wasn’t very well-known. Granted, he hasn’t done any major work since then, so that could be a big part of it. Reunited with several of the cast and crew from District 9, Blomkamp is finally ready to unveil his latest work, Elysium, and I’m happy to say that fans of his work won’t be let down.

A century from now, the planet is in dire shape. Pollution and overcrowding have reduced once-prosperous communities into slums, and every club appears to be resigned to playing nothing but dubstep. The rich/elite of society have created a Stanford torus orbiting earth, away from the lower-class. These folks have access to top-notch medical treatment (fixing broken bones, cancer, and facial disintegration with a single swipe of a machine) and live in gorgeous houses in relative peace.

In charge of maintaining this utopia is Delacourt (Jodie Foster), the heavy-fisted Secretary of Defense. Intent on protecting the status quo at all costs, she shows quickly she’s not hesitant to bend the rules to get her way. Her right-hand man is Kruger (Sharlto Copley), a secret police agent who shows no remorse for acts of violence against civilians.

Meanwhile, on Earth, Max (Matt Damon) is a former convict working in a factory assembling robots. While there’s little happiness in his job, he’s working his hardest to stay away from his past life, which involved stealing cars. When a freak accident exposes him to a lethal radiation dose, he realizes his only hope is to make it to Elysium if he wants to live more than five days.

In order to accomplish this, he first seeks the aid of Spider (Wagner Moura), a local underground leader who works tirelessly to get  people to Elysium. When he discovers Max’s situation, he offers him the opportunity to get to Elysium in exchange for an attempt to steal information from John Carlyle (William Fichtner), the condescending owner of ArmaDyne, the business for whom Max worked.

The heist goes awry and Max is wounded. Desperate, he seeks out Frey (Alice Braga), a nurse and old childhood friend for whom Max still harbors feelings. Desperate to get her sick daughter (Emma Tremblay) to Elysium, she treats Max’s wounds while begging him to take her daughter with him.

“This isn’t science fiction. This is today. This is now,” Blomkamp said recently in an interview, and it’s pretty hard to miss the allegory he’s telling in Elysium. The world he presents is clearly a case of the haves versus the have-nots in terms of health care, and given the political climate regarding the ever-polemical topic, it’s certainly one that could spark a debate.

So that’s the deep-rooted message of the film, but it’s presented in a nice, shiny science fiction wrapper. And boy, what a beauty the wrapping presents. With a budget roughly three times that of District 9, Blomkamp went all out in presenting a future utopia AND dystopia. The visuals are beautiful but not completely outside the realm of believability. The camera angles and fight sequences are reminiscent of a well-produced computer or video game (fans of the Mass Effect universe will be right at home), but it’s done in a manner that won’t turn away cinema fans.

As far as the acting, it’s nothing terribly exciting. Foster is cold and calculated as Secretary Delacourt, while Braga does a solid job as a woman overly protective of her sick daughter. I’ve yet to see a Matt Damon film I haven’t enjoyed, and he does well here as a desperate man willing to do anything for the opportunity to live.

For me, though, the real star (other than the visual effects) is Copley. He caught the world’s eye in District 9, and this is a chance for him to really break out. He was the protagonist in D9  and was also a good guy in The A-Team, so this is really his first opportunity as a villain, and he plays it well. He likely won’t go down as the most memorable or most hated character ever, but it’s nice to see him change it up and play a bad guy for whom there is zero amount of sympathy.

The film isn’t perfect, though. The ending becomes very obvious about halfway through, so the rest of the film is pretty straightforward, no plot twists or turns. While this isn’t necessary to make a great film, I wish something could have been done to make it a little more subtle.

There also appeared to be a bit of a syncing issue with the audio, as it became pretty obvious at times, especially early in the film, the dialogue doesn’t always match up with lip movement. It’s a minor nuisance, but it was noticeable enough for me that it was mildly annoying. 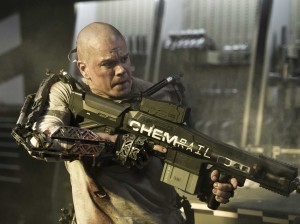 Apart from these minor flaws, though, Elysium does its job, and it does it well. While District 9 was a clear commentary about racism and the issues that Blomkamp and Copley’s native South Africa faced with its apartheid policy, Elysium is an equally blunt didacticism on the quality of life disparity between the rich and poor. It’s not overly preachy, but it’s pretty clear where Blomkamp stands. At any rate, it’s a stellar science fiction action film, and one that should not be missed, especially if you enjoyed District 9.

Elysium gets a B.