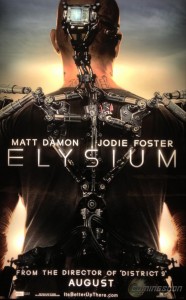 The year is 2154, only two classes of people exist the super wealthy, who live on Elysium (an orbiting space habitat ) and the poor who live on an over populated desolated Earth. Que Matt Damon who plays a recently paroled convict with many criminal counts under his belt who someday hopes to live in the paradise that is Elysium. This film is one that I have been looking forward to for quite sometime.

Neil Blomkamp has proven himself to be my personal Asimov of modern film, with District 9 arguably one of the best films of 2009. Elysium has all the components that made District 9 the excellent film that it is. First the special effects are so well done, and blended into the picture with such finesse, that you believe that its real. Weapons, spaceships, androids – they all feel real even though C.G.I. is used throughout.

Matt Damon is quite good and extremely believable as the anti-hero in this film . Jodie foster is always good and she shows it here with a vengeance. Honestly though I have to tilt my hat to Sharlto Copley who is proving himself to be a force of acting charisma. His performance is as spectacular In a this film as a villain as his performances as a hero. I honestly believe this is the true test of an actor, most often those who play the villain are terrible as heroes. Sharlto is fantastic as he has several epic showdowns with Mr. Damon.

This film is not perfect, as it can be hard to comprehend at times, and leaves a lot of questions unanswered. Despite these few minor issues it’s a great film with a message that speaks almost directly to the economic issues we face in the world today. Elysium is worth its ticket price, and I would highly recommend seeing it in theaters. I still want a sequel to District 9 though, and hope that we shall receive one in the not too distant future.

Elysium is an A-