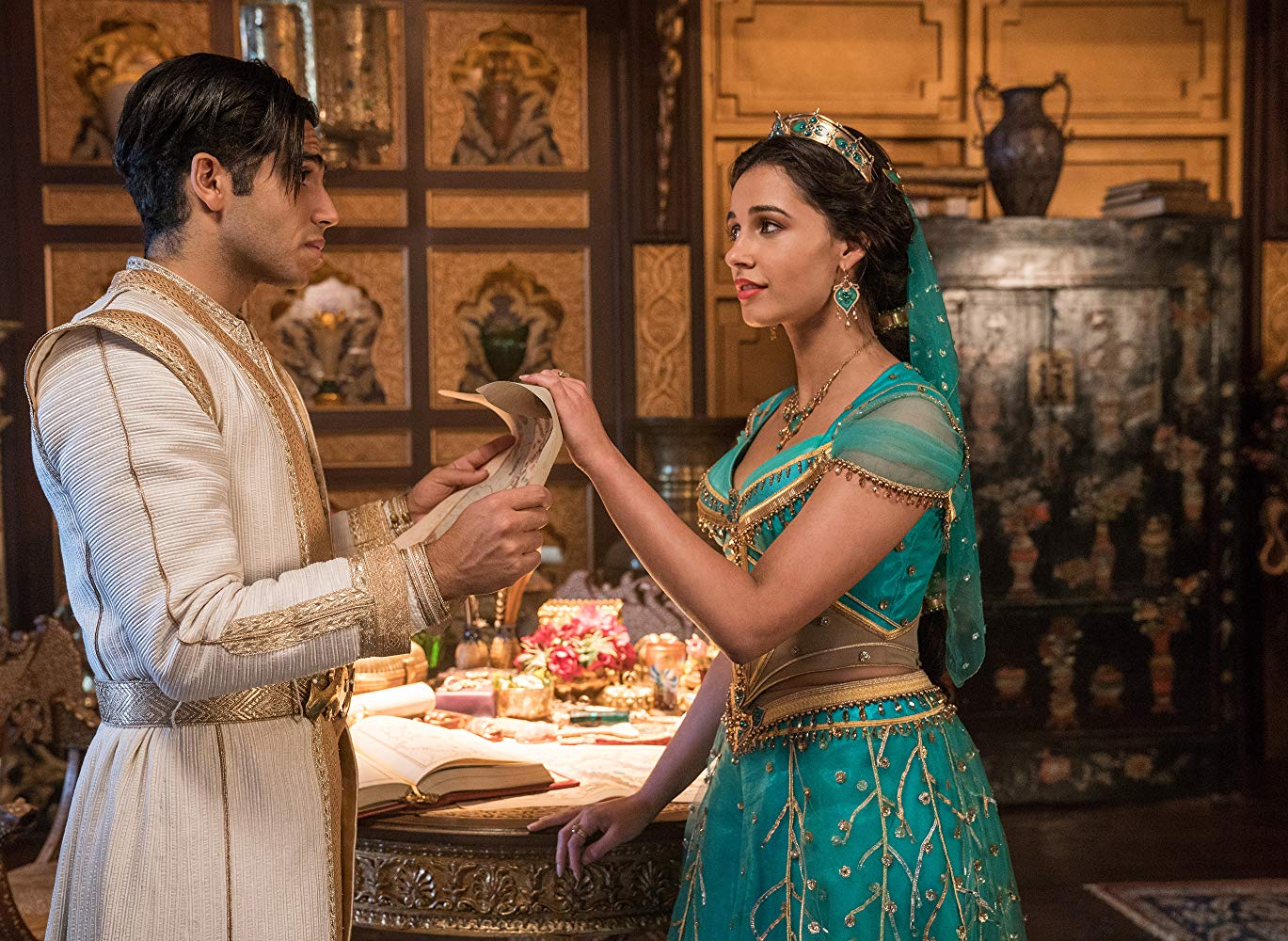 One jump ahead of disaster.

It’s no secret: I’m a huge fan of Disney. I’m intrigued by their live-action remakes and have absolutely loved several of them: Beauty and the Beast, Cinderella, Junglebook. However, when I saw the marketing materials for Aladdin – the remake of one of my all-time favorite Disney animated features – I was less than convinced.

For months it’s been, “Genie isn’t blue,” and “Genie is too blue,”  and “The CGI looks terrible,” etc. But going into the film with low expectations may have very well been the best setup for this film. Afterall, it’s still Disney. And it’s still Aladdin. Ultimately, most people that were bracing for the worst simply got mediocre. And it was nowhere near the disaster we feared.

Everyone knows the story: street-smart Aladdin (Mena Massoud), along with his trusty animal sidekick Abu, steals to get by and cleverly avoids trouble with the law in Agrabah. One day he meets Princess Jasmine (Naomi Scott) disguised as a commoner to escape the palace, and the two get into trouble after Jasime steals a loaf of bread to feed the poor. Aladdin is eventually captured after trying to see her again, and persuaded by the Sultan’s Grand Vizier Jafar (Marwan Kenzari) to steal a magic lamp from The Cave of Wonders. Jafar double crosses Aladdin, who ends up with the lamp – awakening the all-powerful genie (Will Smith) who guides Aladdin toward the person he wants to be through humor and song. 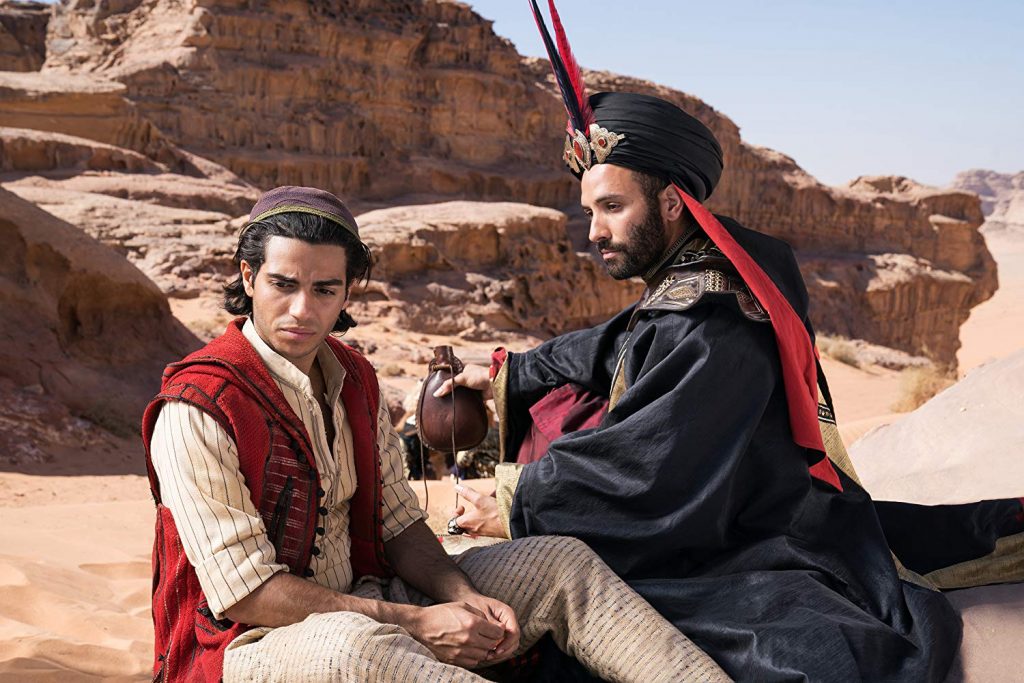 The first act struggles immensely to find its footing, mostly due to Guy Ritchie’s lack of experience with filming a musical. The staging and editing is all wrong, makeing the first big number of the film (“One Jump Ahead”) a complete mess. Ritchie invokes a jarring “speed-up” effect, reminiscent of a Benny Hill number to cover up the fact that he didn’t know how to fit the scenes into the musical number properly. It isn’t until we get to “Prince Ali” that the fun and magic really kicks into place, skipping right over a disappointing rendition of favorite “Friend Like Me.”

The one part of our fears that did hold true is how bad the genie CGI looks. There is no getting around it, the look of computer-generated Will Smith is extremely distracting. It lives firmly in the uncanny valley – so meticulously designed to look realistic, yet lacking the movement and feel to convince your brain you are looking at a real genie in live-action. The parts where genie is disguised in human form are much better, and Smith does a good job making the character his own. The smartest thing he could do is stay away from imitating the iconic performance Robin Williams gave us, and to his credit he does.

I really enjoyed both of the leads. Mena Massoud makes a charming and charismatic Aladdin, while Naomi Scott brings Jasmine to life perfectly. I didn’t always completely buy their chemistry, which was unfortunate because they both give good performances. But they have a lot of great moments that prove they were the right actors for their respective roles. Jasmine is given much more to do in this film, which is an appealing addition. Her new song “Speechless” – written by Benj Pasek and Justin Paul (La La Land, The Greatest Showman) along with Alan Menkin – sounds terrific and has a great message. Unfortunately, the way Ritchie chose to present it in his Sherlock Holmes time-stopping fashion was very out of place in the film. 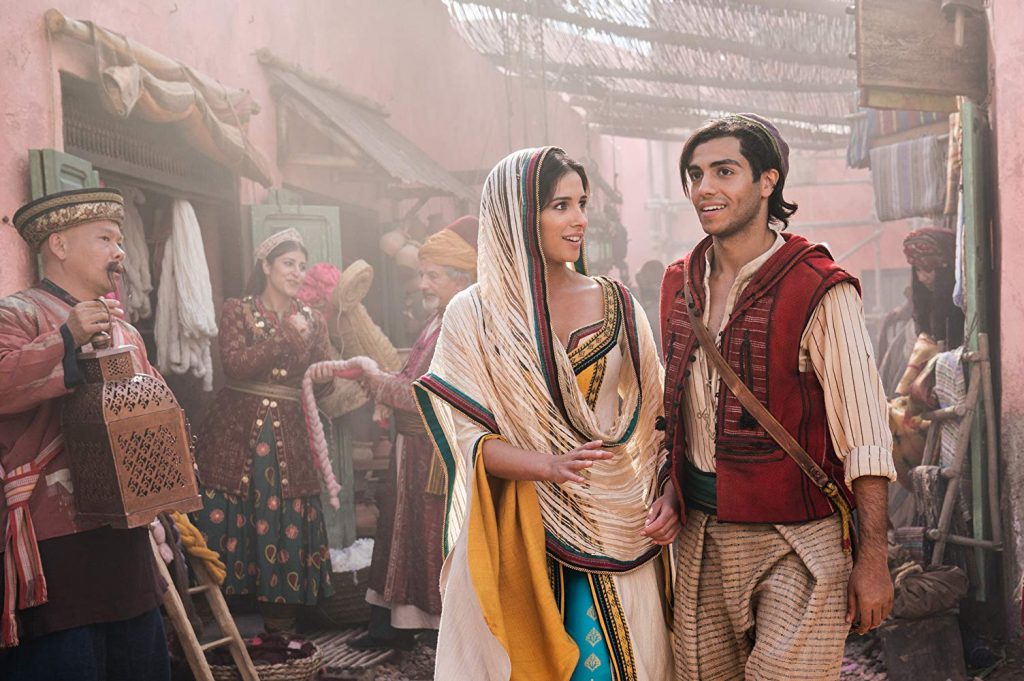 I wasn’t so sure about the casting of Marwan Kenzari as Jafar at first. But honestly, the only thing he lacks is the voice to go along with his animated counterpart. He does very well in the villainous role as he plays the ruthless, conniving vizier. And Alan Tudyk voices Iago this time around, so that is always a win.

Once Aladdin becomes Prince Ali, the film finds its groove and becomes much more entertaining. Where “Friend Like Me” is the show-stopping number of the stage musical, “Prince Ali” is the best number in the new film. Although an extended clip of the number was uploaded a week before the film’s release to lackluster response, I’m happy to report that it works much better on the big screen than a phone or computer. Unfortunately, none of the other songs manage to live up to the magic of the originals and wind up feeling flat.

There are two Bollywood dance numbers that are fun – especially the one after the credits. They were a nice addition and fit well with the film’s setting. Overall, Aladdin manages to grasp the Middle Eastern story well through its casting, fantastically designed practical sets, and beautiful costumes.

The key to the magic of this remake is in the humor. Once Aladdin gets to the palace under the guise of Prince Ali, the film feels much more comfortable and we get more of the Disney magic we expect. Smith and Massoud work great together – not only with the comedy (which there is plenty of) – but they have quite a few touching moments that really work. The biggest surprise was Smith and the script being able to deliver the amount of heart that they did. 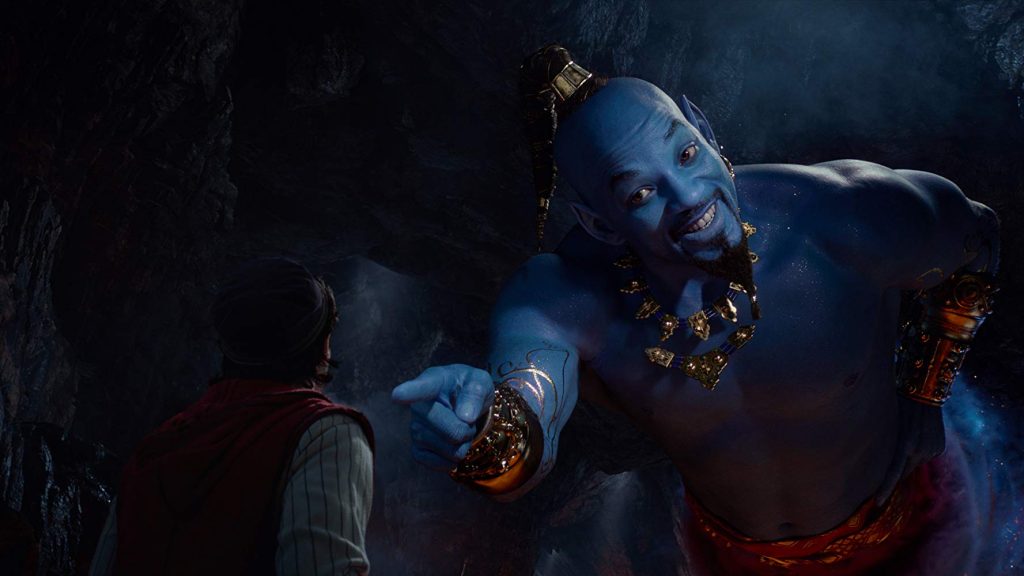 Nasim Pedrad (SNL) is also a welcomed addition as Dalia, Jasmine’s handmaid. She’s hilarious every time she comes on-screen and is an absolute delight as her character guides Jasmine and falls in love with the genie’s human form.

If you can get past the first 30 minutes of Aladdin, it becomes a pretty fun ride. Ultimately, Ritchie seems like the wrong director to helm a musical – and that is the most important element of remaking this beloved film. Luckily there is enough nostalgia to evoke those memories of how great the songs are, and plenty of comedy to keep things entertaining.  On a positive note, Ritchie manages to keep most of the elements of the original intact while expanding the story in a way that is satisfying.

In the end, Aladdin avoids complete disaster and manages to entertain for the most part. It’s a shame that the musical numbers didn’t work as well as they did in the animated classic, or even in the extraordinary stage show. It may not be a whole new world, but there are enough humor and magic to keep this live-action remake afloat. 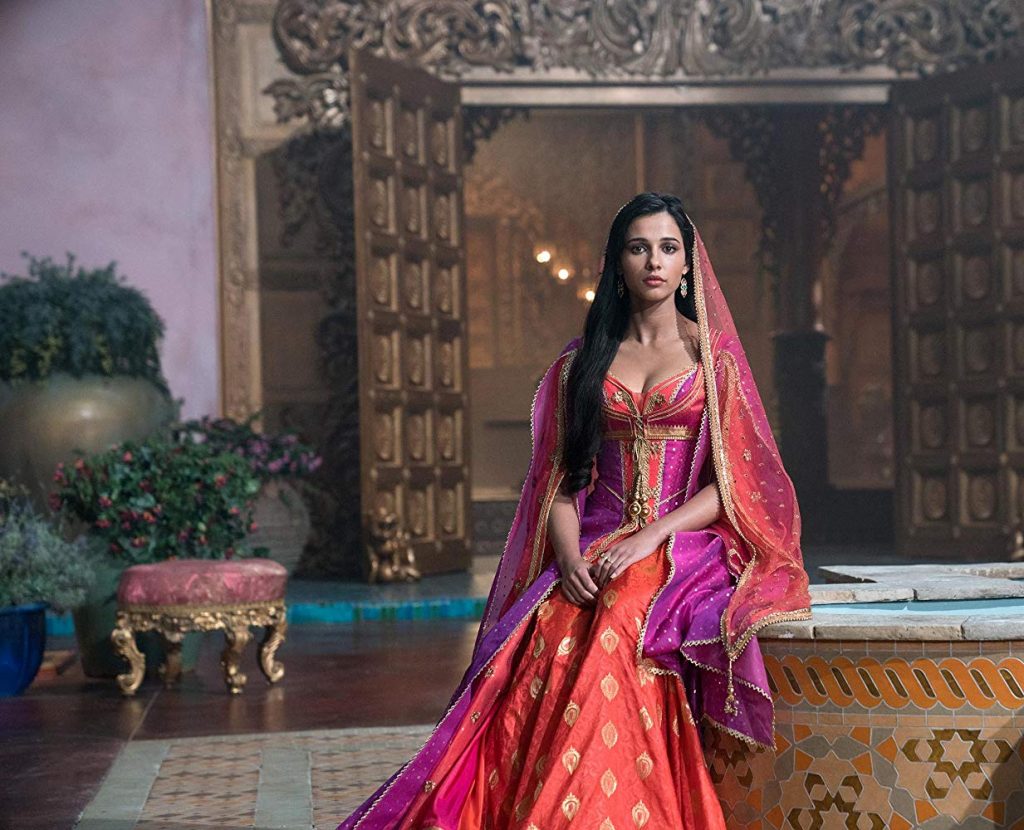