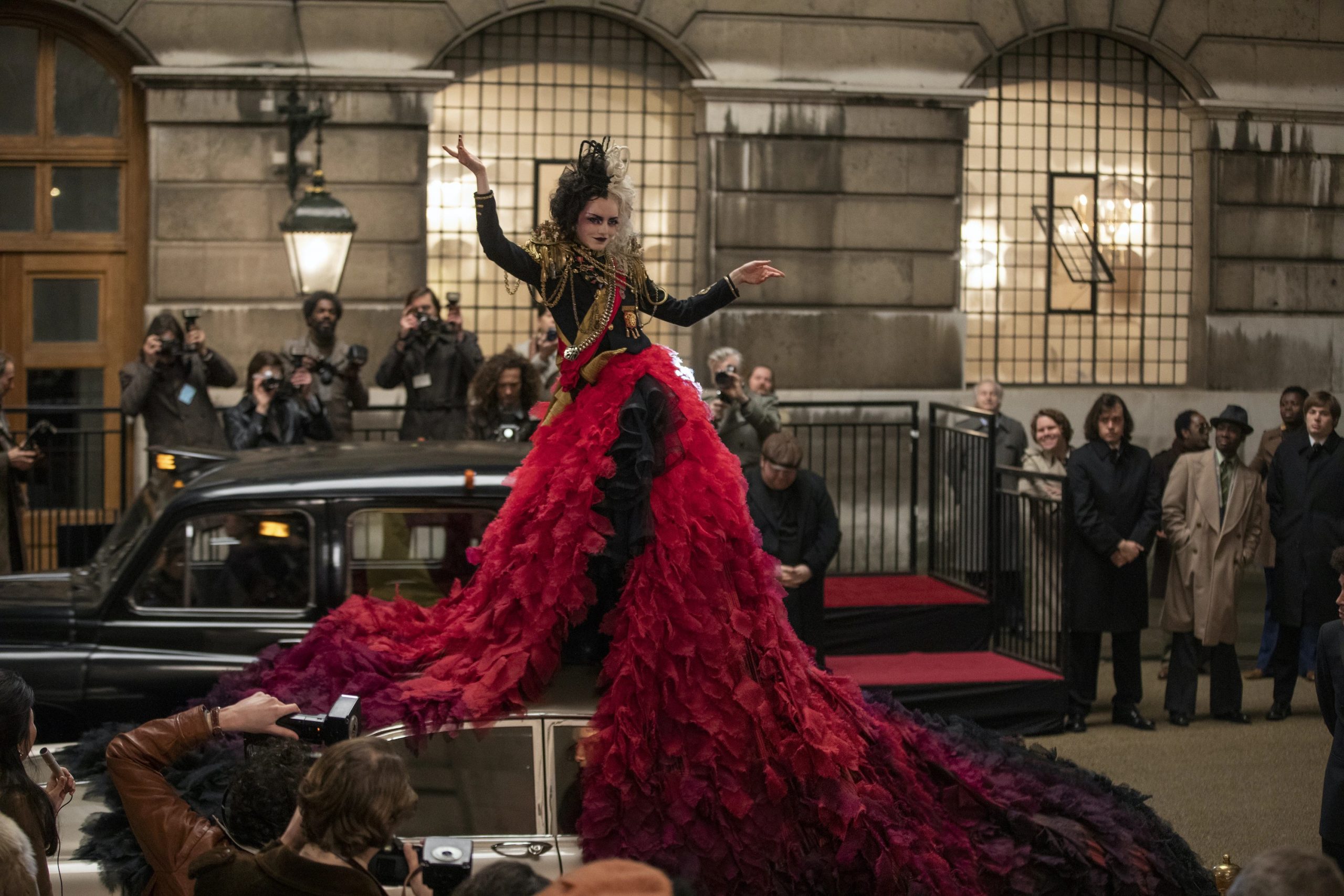 You don’t always need a backstory for a popular big-screen villain. But there are also times where you cant help but wonder – why is this person so evil? In the case of Cruella de Vil – the evil, fur-wearing villain from 101 Dalmations we grew up watching steal puppies to make a fur coat – I think it is safe to say one might be a little curious about how someone could become that way.

Disney has taken a similar approach before, in 2014’s Maleficent starring Angelina Jolie as the evil sorceress. Here they flipped the script and told the story from a different perspective, allowing the audience to sympathize with Maleficent and understand her motivations. And while Cruella certainly employs some of the same tactics, showing the audience the devilish villain as a child and her traumatic backstory, we all know where this character is heading. And there is simply no way we will root for her in the end. And that is why it’s so impressive just how well they pulled this film off.

For the first time, we are introduced to Estella – a brilliant girl who isn’t afraid of anyone. The rebellious Estella frequently gets into trouble at school, defending herself from bullies who pick on her because of her unusual black and white hair. To cope with unfriendly advances, she creates a new persona – Cruella. Her mother Catherine (Emily Beecham) reminds her that she is Estella, not Cruella, and tries to instill in her good values. When tragedy strikes, Estella becomes an orphan – meeting Jasper and Horace, who become her new family.

The three new friends grow up on the street, grifting their way to adulthood and fine-tuning their schemes. They make things work, but it is clear to Jasper (Joel Fry) and Horace (Paul Walter Hauser) that Estella (Emma Stone) has the potential for so much more. Her passion is designing clothing, a skill that comes in handy as they use her creations as disguises for grifts. In an attempt to follow her dreams, she gets a job at an upscale department store where she gets the attention of a famous fashion designer, Baroness von Hellman (Emma Thompson). Through a fortunate series of events, Estella goes to work for the Baroness – but soon finds things with her employer are more complicated than they appear.

The film is an absolute blast, packed with wall to wall needle drops from the ’60s and ’70s that accentuate its punk rock flavor. Forget what you know about the characters, this is a new take that lives on its own very well. The chemistry between Stone, Fry, and Hauser is electric, and it’s endlessly fun to watch them play off of one another. Emma Thompson is delightfully devilish herself, in a performance that is more grounded than Glenn Close in the 1996 live-action remake – yet just as fiendish. You want to know how Cruella learns her ways? The Baroness is your answer.

Emma Stone is a huge reason why this idea works in the first place. The versatile actor is fantastic as always, and gets to play both sides of the villainous coin with this meaty role. She’s sweet and sympathetic as Estella, and enchantingly nefarious as the confident Cruella. Stone puts on a British accent that sounds convincing and doesn’t distract, always managing to fit in with her London punk rock surroundings. The role goes far beyond the glimpses of unbridled evil for the sake of being evil we’ve seen in previous iterations, and Stone allows those layers to flourish.

Cruella’s henchmen are much different here as well, compared to their bumbling, incompetent counterparts in the previous films. Instead of simply being burglars for hire, Jasper and Horace are like family members – and we see how there relationships evolve (and devolve) as Cruella embraces her true form. Joel Fry is charming and charismatic as ever here, and Paul Walter Hauser continues to be one of my favorite actors with his hilarious performance. Their two excellent performances give the characters depth, and it’s interesting to see how they parallel what we’ve seen of them in the past.

Instead of playing it big and over the top, Emma Thompson gives a grounded yet equally terrifying performance as the fashion mogul who gets what she wants no matter who stands in her way. Imagine taking the evil of Glenn Close’s Cruella, and mixing it with Meryl Streep’s fashion designer cruelty in The Devil Wears Prada, and you have a good idea of the character. She pulls off the cruel, manipulative, and sophisticated Baroness with such panache. Thompson is perfect casting here.

Director Craig Gillespie does a fantastic job bringing this story to life, and creates a compelling case for why anyone would ever care about Cruella beyond seeing her lose. Dana Fox and Tony McNamara penned a clever and entertaining script full of equal laughs and heart. It becomes clear where we are heading, and eventually Cruella will become a villain that we love to hate. But for now, Cruella de Vil is a devilishly fun anti-hero who makes it hard to watch without having fun.

Cruella is now playing in theaters and available on Disney Plus with Premiere Access for $29.99.