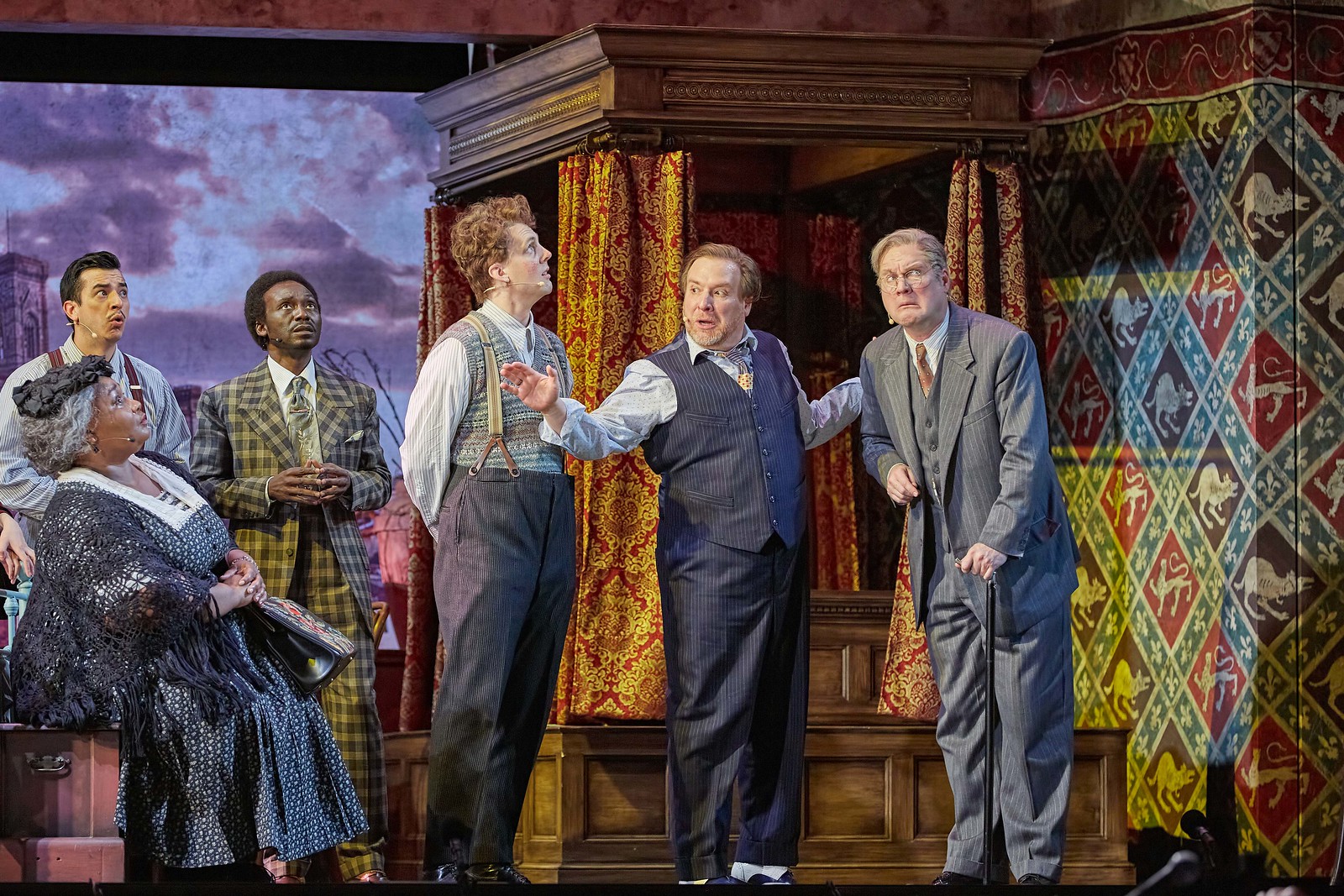 The parallels between Gianni Schicchi’s premiere in 1918 and its placement as the opener for Opera Theatre of St. Louis’ new season are striking. Then, as now, the world found itself struggling with a pandemic, political tension, economic hardship, and of course, widespread divisiveness. Back then, just as now, things seemed dire.

But once again, the arts have led the way out of the darkness. Adapting to a modern time of immense change, Opera Theatre St. Louis rolled with the punches to become one of the first companies to get out of the gate and return to live performances. Overcoming the challenges of presenting a season indoors, OTSL pivoted to a new type of season, one that was performed outdoors with a smaller seating capacity and social distancing.

It was not easy. It was not simple. But, after months of careful planning OTSL enthusiastically welcomed back audiences with the comedic opera, Gianni Schicchi as their opening production. Running around one hour, the company’s production of Puccini’s love letter to Florence is a tightly paced, rapid-fire burst of kinetic joy.

Featuring two real historical figures in Buoso Donati and Gianni Schicchi, the opera is a fast, furious, and funny conclusion to a Puccini triptych centered around the theme of death. Despite the gloomy underpinnings of its predecessors, Gianni Schicchi has stood the test of time on its own. First performed by OTSL in 1977, its lighthearted spirit and brisk pace make it the perfect opener for their glorious return.

Although Gianni Schicchi appeared briefly in Dante’s Inferno, he takes center stage here as a cunning fixer who is one step ahead of everybody else. Called upon after the death of Buoso Donati, a well to do aristocrat who has left his entire estate to a monastery, he quickly sets a plan into motion that will change his fortunes. Despite being regarded as vulgar, Donati’s family sees his resourcefulness as a means to an end for controlling the deceased’s vast holdings. However, they foolishly underestimate his true intentions.

Even though he was recruited by the family to help restore the estate to them, Gianni Schicchi cleverly maneuvers the proceedings to his advantage. First, he dupes a local solicitor into changing the will, allowing the estate to be split up to new heirs. Then, he carefully doles out the spoils of his plot to the greedy family, but on his terms.

Finally, he helps Rinuccio, a local boy with no dowry, marry his daughter, Lauretta. Looked down upon because of his status, Runuccio’s new wealth allows him to rise above his class and enjoy his newfound platinum status as he builds a new life with his beloved.

Gianni Schicchi is propelled by a commanding performance from baritone Levi Hernandez who guides Gianni Schicchi from one escapade to another. Joshua Blue and soprano Elena Villalón are also excellent as Rinuccio and Lauretta.

Smartly directed by Seán Curran with a wonderful musical accompaniment from the St. Louis Symphony Orchestra (conducted by Leonard Slatkin), Gianni Schicchi is a breakneck adventure that allows audiences little time to exhale. Rapid-fire and relentless, Gianni Schicchi is a much-needed return towards normalcy for Opera theatre St. Louis.

Performances are held outside, on the parking lot of Webster University, near the Loretto-Hilton Center. For tickets, showtimes, and more information visit http://www.opera-stl.org.