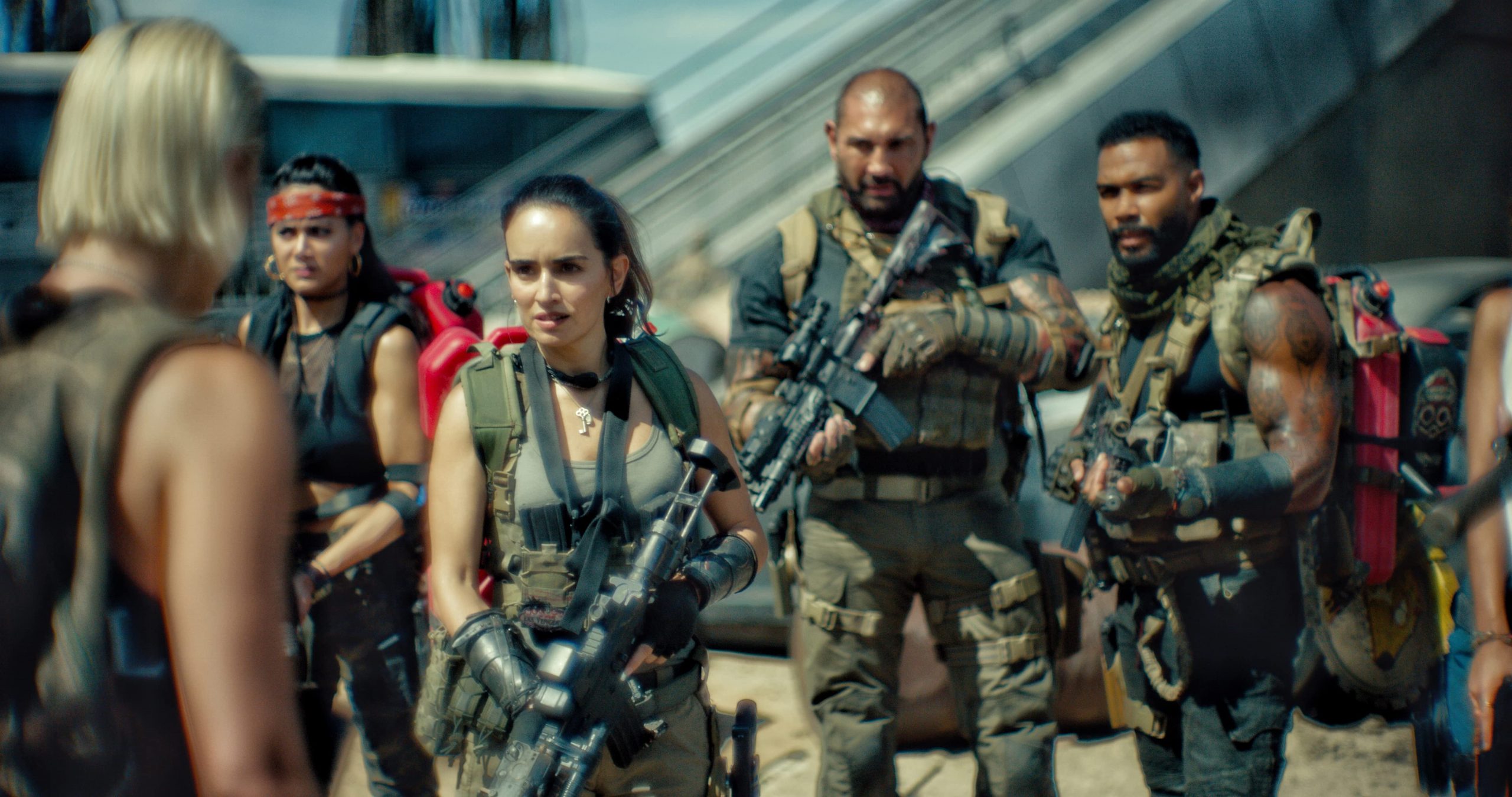 Zack Snyder returns to the genre that put him on the map with Army of the Dead, now streaming on Netflix.

Seventeen years after his feature debut with Dawn of the Dead, the director takes on writing and cinematography duties as well. It has been over a decade since he’s helmed an original story, dating back to 2011’s Sucker Punch. After spending numerous outings with Superman, Batman, Wonder Woman, and the rest of the Justice League – it’s refreshing to see him take on a fresh concept like ex-soldiers staging a casino heist during the zombie apocalypse. Unfortunately, when left to his own devices, things tend to screech to a halt more often than not in what could have been a briskly-paced action movie.

Scott Ward (Dave Bautista), living with the guilt of his actions during the zombie outbreak that turned Las Vegas into a quarantine zone, is tasked with putting together a team to steal $200 million from a vault deep inside one of the zombie-infested casinos. Bly Tanaka (Hiroyuki Sanada) and his right-hand man Martin (Garret Dillahunt) promise him a cut of $50 million to divvy up however he pleases, as long as he gets out alive with the money. He recruits fellow mercenaries Vanderohe (Omari Hardwick) and Cruz (Ana de la Reguera), safecracker Dieter (Matthias Schweighöfer), viral zombie-killers Mikey Guzman (Raúl Castillo) and Chambers (Samantha Win), and helicopter pilot Peters (Tig Notaro) to pull off the job. Along the way, Lilly (Nora Arnezeder), Burt (Theo Rossi), and his estranged daughter Kate (Ella Purnell) join the team.

As for the good, there are some interesting concepts Snyder brings to the genre of the living dead. He introduces the idea of different tiers of zombies – the typical kind you see in movies, and also the “Alphas” who are more intelligent and can be negotiated with. The latter group is lead by two zombies referred to as “The Bride” and “Zeus” who allow the team safe passage when they offer a sacrifice. We also see the affects of the zombie plague on animals – most notably one of Siegfried & Roy’s tigers.

As for the bad, all of Snyder’s worst tendencies are on display. While the director has made a name for himself when it comes to jaw-dropping visuals, they’ve become overindulgent over the years. Style often comes over substance, and you really feel it. The film clocks in at 2 hours and 28 minutes long, packed with over-the-top eye candy that would have better served the film having been trimmed down. Much of what we see may look cool, but it doesn’t move the story along and weighs is down. Furthermore, Snyder as DP often employs his new favorite tactic of extreme, out-of-focus close-ups, and just lingers on his subjects. And don’t even get me started on his awful needle drops. He seems to have learned from his former collaborator James Gunn on Dawn of the Dead that good music can make a film. Unfortunately, this film’s choices feel out of place more often than not, taking the audience out of the moment.

Dave Bautista was a solid choice to lead the film, due to his size and charismatic screen presence. I’m also glad to see him take on a variety of roles over the past seven years are so since Guardians of the Galaxy. He’s the perfect fit for an ex-mercenary, zombie-killing tough guy. And he also gets to do some emotional heavy-lifting when it comes to his character’s relationship with his daughter. His scenes with Purnell are heartfelt and believable, furthering the stakes of the film. The entire cast does a good job – one of the standouts being Tig Notaro, who took over the role after principal photography had already wrapped. Her integration into the film is seamless, and you would never know she filmed her parts alone on a greenscreen otherwise.

While there are certainly some cool action moments, along with ambitious ideas for the genre, the film unfortunately falls victims to Snyder’s overindulgences far too frequently. Cut thirty to forty-five minutes of unnecessary lingering shots and bad jokes, and there’s a nice little down-and-dirty zombie heist movie in there. However, the former music video director chooses to leave in everything he thought looked cool at the expense of the pacing. Much of the fun is buried in the tedium.