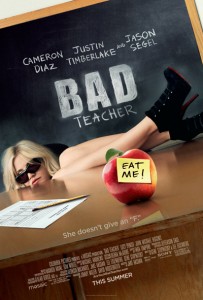 I can already see it now; I login to Netflix and click on Bad Teacher, and automatically it tells me that if I liked it I might also like Bad Santa, Dirty Rotten Scoundrels, etc. It is yet another film where every main character is despicable, but it still somehow manages to entertain.

Elizabeth Halsey (Cameron Diaz) is a foul-mouthed, pot smoking, gold digging, junior high teacher who wants nothing more than to find a man who will become her meal ticket. When her rich fiancée leaves her due to finding out about her true nature, she is forced to actually keep her teaching job.  Her reasons for teaching are seemingly because she can have short hours, summers off, and not a whole lot of accountability at her current school. However, when Scott Delecorte (Justin Timberlake), an heir to an upscale watch company, begins teaching at her school she finds a new found interest in teaching and the children around her.  Unfortunately for Elizabeth,  the bright and sunny teacher, Amy Squirrel (Lucy Punch), becomes competition for Scott’s affections. Not only that, but Amy is the only person who can see through Elizabeth, and actually cares that she has no passion for the job.

Color me surprised, but I really liked Cameron Diaz in this role. She brazenly takes on the crassness of the role and seemingly never looks back. I haven’t been her biggest fan in the past, but despite the fact that her character shouldn’t be attractive at all, I was really endeared towards her.  Her character is written in such a way that she is deplorable for the majority of the film, but shows just enough heart in portions to make it enjoyable.

Almost every actor in this film does a solid job with what they are given. Jason Segel steals just about every scene he is in, as one of the few charming characters contained within the film. The only unfortunate thing is that we don’t see more of him. I could’ve done with a bit more interaction between his gym teacher character and Elizabeth. St. Louis actress Phyllis Smith is yet another scene stealer within the film, easily portraying a sense of innocence that none of the other characters in the film have.  Lucy Punch continues to bring her unique brand of humor to the screen, and once again I’m not entirely sure it translated all that well. Although, she is certainly less grating in this role than a lot of her previous ones. Let’s hope this is a trend that continues. Justin Timberlake manages a solid comedic performance, but much like Segel isn’t given enough to do.

Bad Teacher is a comedy film that never achieves the level of hilarity it sets out to attain. That doesn’t mean it doesn’t have its moments, it just had a potential to be a lot funnier. The only thing is, I can’t put my finger on exactly on what could’ve pushed it that extra inch. I do think that with another cast it would have fallen on its face, and would’ve never gained enough traction with an audience.

If you are fan of any of the actors in the film, it will probably be worth the price of admission for you. If you are easily offended, you’ll probably want to skip this one. It isn’t as offensive as I thought it would be, but there is plenty to offend someone with conservative sensibilities.