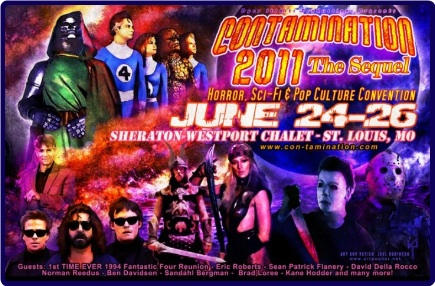 Dyer Straits Productions (DSP) presents year two of St. Louis’ only pop-culture, horror and sci-fi convention on June 24-26, 2011.  Contamination 2011: The Sequel takes place at the Sheraton Chalet in Westport Plaza and is bigger and better with celebrities, film icons, TV stars, sports figures, models/Playmates, filmmakers and musicians.  Eric Roberts and “The Boondock Saints” Sean Patrick Flanery, Norman Reedus and David Dela Rocco are headlining the event along with an impressive lineup of icons at this highly anticipated follow-up event.

Fans will get a total “Celebrity” experience: a chance to meet the celebrities, get autographs and pictures and a lucky few will even get to have dinner with them.  There is a 24 hour movie room…an outdoor “Drive In” movie experience…a concert by a Grammy award winner…prizes for best costumes…shopping in the dealer room… seminars with the celebs and filmmakers…and “Contaminated” parties all weekend long!

Tickets for the weekend convention and concert are available online now, but the VIP passes, Celebrity Dinner tickets, Vendor Tables and rooms at the Sheraton Westport have all sold out.  Much more information can be found on the DSP website.  Check the site and their Facebook page for updates and a complete list of celebs, artists, filmmakers, musicians and vendors.

The successful event that began this new tradition in St. Louis – Contamination 2010 – was held April 30 through May 2, 2010 at the Holiday Inn Viking and featured film legends from popular horror classics like “The Howling” and George A. Romero’s “Night of the Living Dead,” pop culture icon Larry Thomas “The Soup Nazi” from “Seinfeld,” sports legend Ken Norton, the 70s Godfather of Soul Cinema Fred “The Hammer” Williamson, “The Lost Boys” Brooke McCarter and Billy Wirth and showcased one of the most recognized cars in the world – The Batmobile.

G Tom Mac– Artist responsible for “Cry Little Sister” from “The Lost Boys”, He has also won a Grammy for his contributions on Eminem’s “Recovery” Album and he has also wrote and performed endless amounts of songs over the last 25 plus year. His latest work is featured in the movie “Emerging Past”

Thomas Churchill– He is a Film Producer, Director, Writer, and Actor. He has been involved in such movies and shorts as “Devoured”, “Death ‘N Taxes”, “Night Out: Vampires”, and his latest projects are “Mr Hush” and “Emerging Past”

Rebecca Staab– She played Susan Storm in “The Fantastic Four”. She has a long line line of TV Sitcoms in which she starred in or was a part of over the last twenty years

Alex Hyde-White– He Played Dr. Richard Reed (aka Mr Fantastic) in “The Fantastic Four”. He has also had an amazing career that has spanned over the last 25 years

For this and much much more make sure you get yourself “Contaminated” and come out to Westport and enjoy Contamination 2011: The Sequel 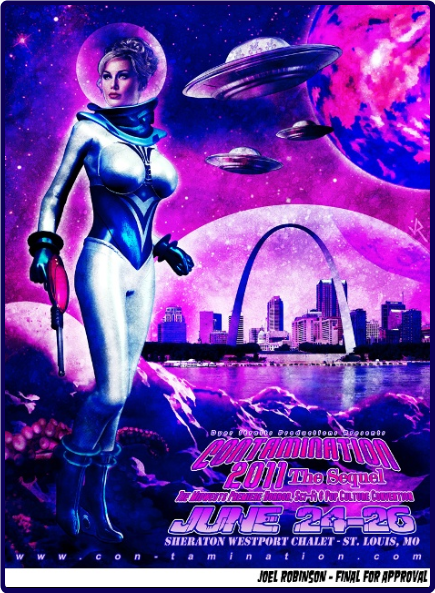