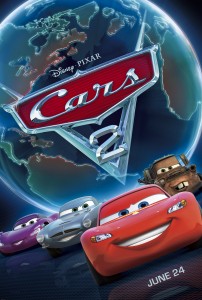 As a child I was a constant source of academic disappointment to my parents; a perennial underachiever. I didn’t get bad grades, mind you. I was solid B-student. Sure, I could have gotten an “A” with a modicum of effort but if I could pull a “B” (or the occasional “C”) with little to no work then why bother? And I must admit, I always found their frustration towards my attitude perplexing…then I saw Cars 2.

This time, racecar superstar Lightning McQueen (Owen Wilson) and his best friend, dilapidated tow-truck Mater (Larry the Cable Guy), travel overseas to compete in the World Grand Prix. But Mater quickly becomes embroiled in international intrigue after being mistaken for a spy by secret agents Finn McMissle (Michael Caine) and Holly Shiftwell (Emily Mortimer). Cars 2 differs from its predecessor by significantly upping the action. Also getting “upped”…the Larry The Cable Guy quotient. Lightning McQueen ends up taking a backseat (can a car take a backseat?) as Mater becomes the focus of the film. It’s a fatal flaw that forces the film rely on Larry’s not-so-unique brand of redneck humor, and it’s as tiresome (ummm…no pun intended) as it is uninspired.

The animation is spectacular as the film becomes a travelogue of European cities. And there are some exciting action sequences, especially the film’s James Bond-style opening. But the jokes fall flat as not even Pixar can freshen-up Mater’s warmed-over, cornpone shtick. Compounding problems is the virtual absence of Lightning McQueen. The filmmakers seem to have forgotten that he’s the true star of the film (if Kindergarteners’ backpacks are any indication). But he’s been reduced to little more than a glorified cameo.

Pixar has shockingly given us their first film that’s not “special.” While the film is still significantly better than most animated fare, it’s hard not to feel let down. Perhaps it’s unfair to complain that they haven’t created yet another masterpiece that speaks to your soul…but they’ve never had that problem before. If this was a DreamWorks film people would most likely be falling all over themselves to praise it. But Pixar isn’t DreamWorks. And as my mother would constantly remind me after parent/teacher conferences, “You’re better than ‘good enough.’”