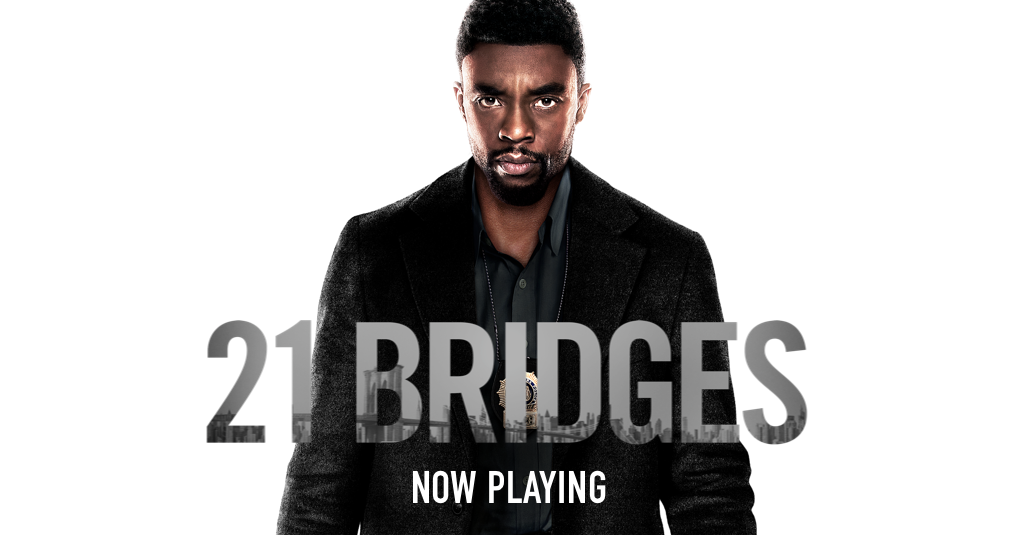 I usually try to open my movie reviews with a fun intro or clever anecdote, but I’m coming up with a complete blank for 21 Bridges.

I was pretty excited for this movie. Chadwick Boseman, the Russo brothers producing, and the trailer for the movie made it seem like it’d be a fantastic manhunt thriller. And in its defense, there are a few things that the film does well. But just be warned as you go into the theater, as the premise of the film delivers, what you see is not always what you get.

Boseman features as the protagonist, Andre Davis, a straight-shooting police officer who’s developed a reputation for having a fast trigger finger (eight shootings in nine years). He’s able to justify his shootings as being in self-defense, but at this point in his career, everyone in the department knows he’s not afraid to be the tip of the spear for the police.

When eight police officers are ambushed during a drug robbery, Davis is called in to investigate and try and find the perpetrators (Taylor Kitsch and Stephan James). Deducing their modus operandi, he orders all 21 bridges leading in and out of Manhattan to be shut down. Paired with narcotics officer Frankie Burns (Sienna Miller), their goal is to track down the suspects before traffic picks up in the morning.

As I said earlier, the film does do a few things well. The stunts and action scenes are very well done. There aren’t long-lasting scenes of pugilism that in reality would have caused massive internal injuries; punches and collisions seem to carry real weight behind them. The cast does a decent enough job with the script they were given. Boseman, Miller, and JK Simmons are all seasoned veterans, and they know what they’re doing.

Unfortunately, most of the goodwill that’s generated by the above gets drowned out by a lackluster plot. In a film that ultimately bases its premise upon the idea of moral ambiguity, there’s almost never any doubt what Davis is going to do. When we find out the motives of the suspects and one of them is shown to be sympathetic (an idea that’s shown in the first few minutes of the film), it ultimately robs confrontational scenes of their tension, as we ultimately feel like we know how the scene will play out.

There are meant to be some plot twists in the film as well, but ultimately, they’re telegraphed well ahead of time. I won’t spoil anything, but it was fairly easy to discern after the first five minutes that the film was ultimately going to be about more than just a heist and manhunt. What we ultimately end up with is a very generic cop movie that’s been told many times before; the only real pull is the cast, but even that isn’t enough. There’s very little character development beyond that of one of the suspects; all of the police officers involved have very polarized senses of morality. The final confrontation is meant to show some shades of ambiguity, that the world is shades of grey instead of black and white, but any real sense of it is destroyed by the character presenting the situation.

Ultimately, what could have been a film with a lot of promise gets wiped out by an overly-generic plot. It’s not a terrible movie, but when there are other stellar films coming out this weekend, I’m hard-pressed to recommend this one.