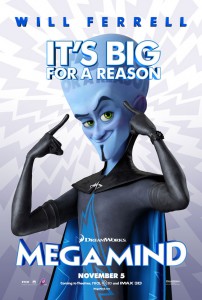 DreamWorks Animation has been hot on the heels of Pixar for years now, but until earlier this year had failed to capture the same type of magic. However, their spring release of How to Train Your Dragon was a resounding hit with both critics and audiences alike. Can they make magic happen twice in one year?

Megamind (Will Ferrell) along with his rival, the superhero Metro Man (Brad Pitt), were sent away from their home planets before their destruction, much like another famous comic book hero. Metro Man landed in the home of a wealthy couple who could give him everything he wanted, while the young blue baby with a oddly shaped head landed in the middle of a prison yard. Despite having what appears to be a good heart, this young alien is left playing second fiddle to Metro Man, and eventually embraces the villainy around him. As the newly crowned super villain, Megamind, he goes about making over the top schemes and gadgets to bring about Metro Man’s downfall. Usually these schemes involve local reporter, Roxanne Ritchi.

When one plan finally works, Megamind and his Minion (David Cross), must find a suitable new hero to use their super villain plans against. The two go about creating a superhero out of Roxanne’s bumbling cameraman, Hal Stewart (most likely a play on the comic book Green Lantern’s Hal Jordan and John Stewart). However, like all comic book villains, Megamind’s plans go awry, and reveal he might not be the villain he thinks after all.

Unfortunately for Megamind, it is the second super villain turned hero movie this year, following the wildly popular Steve Carrell animated vehicle, Despicable Me.  This makes the film seem a little bit stale, and especially when you compare the two side by side. Megamind has the better animation, better voice cast, and better marketing, but it seems to lack a lot of the heart that Despicable Me had, which makes it harder to enjoy.

This is ultimately the problem with Megamind, almost everything in the film has been done before, and been done by someone else better. (See Pixar’s The Invincibles) The film desperately tries to pass itself off as something new and original, but it continually retreads superhero cliches without bringing enough humor or wit to make it worthwhile. Its most clever moments come when it spoofs the superhero formula almost directly. One of my favorite parts was Megamind’s technological impersonation of a father-like figure obviously based on Marlon Brando’s Jor-El from Richard Donner’s Superman.

Despite a voice cast that boasts talent like Jonah Hill, Will Ferrell, Tina Fey, David Cross, and Brad Pitt, it is nothing special. Compared to the voice cast of many other animated features of the past few years, and it doesn’t stand apart.  The cast are all talented actors, but somehow fail to convey the right amount of emotion. Too many people in the cast desperately oversell it or go in the complete opposite direction and undersell it. David Cross and Jonah Hill, despite being two of the smaller names on the cast list do the best with what is given, and far outshine their colleagues.

This isn’t to say Megamind isn’t a good film, in fact I’m pretty sure you’ll enjoy it. It just doesn’t bring a whole lot to the table when compared to a lot of other animated features that have been released recently.  The theater never roared with laughter like with Despicable Me,  it never gasped with awe due to the effects like in How to Train Your Dragon, and it didn’t illicit any tears from the audience like Toy Story 3. The film did leave a lot of people with smiles on their faces, so there isn’t a lot more you can ask for.