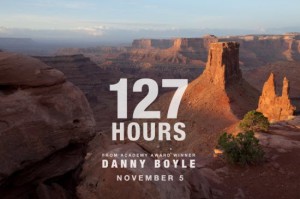 The events of 127 Hours are almost completely true. In May 2003 Carnagie Mellon graduate Aron Ralston decided to hike Blue John Canyon in Utah. Disaster struck when Ralston’s lower right arm was pinned between a boulder and rock wall. The film follows his 127 hours where he was stuck in Blue John Canyon with limited amounts of water, and other supplies.  Ralston only survived by amputating his own arm with the use of a multitool, which contained a dull knife.  Ralston then had to rappel down a 65 foot sheer wall, and try to hike 8 miles back to safety.

I know what you are thinking, “Blake, did you just give away the whole story?” Nope, as a matter of fact, this was a major story in the media back in 2003, and knowing the story behind it gives a little bit more perspective into what you are getting yourself into. The beauty of 127 Hours is not derived from plot twists and bits of rising action, but from the quality of performance given by James Franco, and the fantastic directing of Danny Boyle.

Director Danny Boyle described his film, 127 Hours, to a London paper as “an action movie with a guy who can’t move.” This statement is so perfect that I doubt I could sum up the film any better. Despite the majority of the film taking place in one small confined area, it only helps bring a tense feeling to the film. The entire film is seen from Ralston’s point of view, and done so well that an hour and a half film makes you begin to grasp the superhuman feat of surviving in what seems an endless situation.  Boyle’s directing and Franco’s take the audience through a roller coaster of emotions.

For a film which climaxes with a person amputating his arm, the film is very entertaining. Whether it be the highly entertaining and introspective hallucination scenes or the talk show style video Ralston does for those who might find him; Boyle never lets the subject material get too dark.

Boyle has made a career out of taking dark subject material and making it stylish, and if I dare to say it, fun. Take a look back across his filmography and you’ll see adrenaline filled horror pieces (28 Days Later), the psychological effects of drugs (Trainspotting), and gritty but highly entertain fare such as Slumdog Millionaire. 127 Hours takes the best parts of these films, and combines them all for a top notch film, that is only complimented by the nuanced and award worthy performance of James Franco.

I’ll be highly surprised if this film doesn’t receive a number of awards nominations this year. Boyle and Franco should both be readying acceptance speeches for their work.