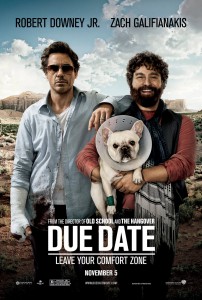 A modern day “Planes, Trains & Automobiles” for the “Hangover” generation, “Due Date” puts Robert Downey Jr. and Zach Galifianakis together in a fashion reminiscent of that which we saw Steve Martin and John Candy in 23 years ago. This time, the plot revolves around getting the main character home in time for the delivery of his first child rather than Thanksgiving, and his companion is a wannabe actor rather than a shower ring salesman.

Peter Highman (Robert Downey Jr.) is a business man who is in Atlanta and needs to get home to his wife Sarah (Michelle Monaghan) in time to witness the birth of their son. Unfortunately for Peter, he has a run-in with Ethan Tremble (Zach Galifianakis) at the airport, and an unfortunate luggage exchange between the two leads to the two of them getting kicked off their flight and put on the no fly list. With no wallet, clean clothes or even a credit card, Peter is forced to travel with Ethan to Los Angeles by any means necessary.

The film is director Todd Phillips’ first film since “The Hangover,” the smash hit comedy of 2009 which still holds the title for highest grossing rated R movie of all time. Phillips applies many of the same comedic styles to “Due Date,” and the humor is very successful in the same ways. Downey Jr. and Galifianakis have a great chemistry together on-screen, where seeing the two of them interact as an extremely “odd couple” never gets old. Throughout the film, you can’t help to cringe at most of the things that Ethan does, and to hope that you never have to travel with anyone that resembles the character. Galifianakis plays the role to a T, coming out of his shell even compared to his role in “The Hangover,” exhibiting a larger-than-life persona as the dim-witted prima donna. Downey Jr.’s reaction and irritation is as realistic as it gets, and you can’t help but to feel a bit sorry for his character.

Compared to “The Hangover,” this film seemed to be marketed a bit more heavily and with more of the punchlines shown in the trailers. Luckily, there is more than enough going on in “Due Date” to keep things fresh – many of which are greatly unexpected. I won’t ruin things by putting the specifics in the review, but let’s just say that they involve drug deals, car wrecks, and border crossings (sounds pretty exciting). The two travelers run into characters played by Jamie Foxx, Danny McBride, and even Juliette Lewis – whom all add to the fun. Overall, the film has a winning formula and two charismatic actors in the lead that make it work. The result is a lot of laughs, and enough originality to keep things from getting stale or too familiar from what we know and love.

DUE DATE is a B