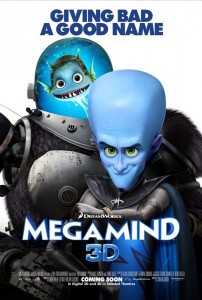 Megamind is a not bad but not great film that takes a very scatter shot approach at lampooning the superhero genre and never steps out with its own message or voice.

The premise of the film is familiar as it is basically ripping off every superhero movie before it.  Megamind, like Superman, is jettisoned from his plant at the cusp of its destruction only he doesn’t have superpowers beyond high intelligence.  But don’t worry; there is a Superman in this story. Megamind’s arch rival is sent out as his race’s last hope, a much more human like race, from Megamind’s neighboring planet before it too is destroyed.  The two become rivals unlike any other in Metro City and they do countless battles where Megamind’s greatest victories are near ones.  It’s when an unlikely twist is thrown into their relationship that Megamind is forced to rethink his ways.

Some people will be quick to point out that this is the second “bad guy” animated film of the year, following this summer’s Despicable Me.  I can safely say, in my opinion at least, that this is the better film of the two; though I am in the minority on Despicable Me in that I thought it was horrendous.  The super villain as the main character plot is something that has always intrigued me and while Megamind is a step in the right direction towards a proper dissection it leaves a lot more to be explored.  Anytime films look at things from the bad guy’s point of view it is usually played for satire and laughs, especially with animated films, and I just think there is a great dark story to be told with the material.  Now I wasn’t expecting that here obviously, it is a family comedy, but I think they could have dipped there toes into making it a bit darker at times and still captured the family tone.

Actually, since discussing the tone I should mention that the film does do a good job at being something more than just a pop culture comedy.  You will still find plenty of references though, with the music cues possibly eclipsing Shrek level overkill (that is outside a brilliant use of “Welcome to the Jungle”), but the film has Megamind looking into himself just as much as he makes a fool of one’s self.  It is a step in the right direction for the more “pop” entries in DreamWorks catalog that we seem to be alternating with as of late from the studio.  But don’t go in expecting the brilliance of Pixar or the Toothless scenes of How to Train Your Dragon, Megamind manages to safely avoid being an atrocity with the likes of Shrek 3 and Monsters vs. Aliens.

And I shouldn’t sound all hard on the film.  I did enjoy Will Ferrell and David Cross’s work in the film and will take this film’s Minion over Gru’s any day of the week.  The finale of the film is the highlight of the film blending humor and action together quite well with a good twist or two thrown in for good measure.  I do wish there was a bit more action in the middle bits but I appreciate DreamWorks giving the story an honest shake here in the end.

In the end, Megamind is an alright entry into the DreamWorks filmography but pales in comparison to the studios earlier effort this year and anything made by Pixar.  I really wish DreamWorks would stop so heavily turning to pop culture references as a way of getting laughs or using it as an excuse for story as Megamind walks a tight rope of being far to reliant on these tropes.  I do think it blazes enough of its own story and path to merit checking it out if interested, just don’t expect it to change the way you think about animation or the superhero genre.

Megamind is a C+