Another Take By Zac: Film Review: Due Date 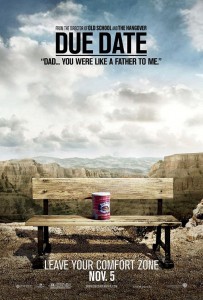 Due Date is the latest from Todd Phillips and he smartly lets his leads of Robert Downey Jr. and Zach Galifianakis make the most of a good but far from great script/story.

Peter Highman (Downey Jr.) is a straight shooting architect, with occasional rage issues, that is on his way home to witness the birth of his first child.  His plans are delayed though when his path becomes intertwined with an odd wannabe actor with a dog, Ethan (Galifianakis), and the two end up on the no fly list and have to drive cross country to get home in time.  Of course shenanigans occur along the way and the two get into a lot of trouble as their trail gets weirder and wilder.

Now, this film is being sold as the next film from the director of The Hangover and if you set your expectations for something like that you are going to be disappointed.  The film is funny but it never has the rhythm or consistent laughs that The Hangover had nor the unique premise and original storyline.  I am not one of those people who think The Hangover is god’s gift of comedy upon the world like many hailed it last year but the film was a very humorous and fresh entry into the genre.  Due Date has more than a handful of great comedy scenes but, like I mentioned above, never flows or gets the appropriate cadence it is going for.  Though a second viewing might benefit this film as the humor is very laced into the passing dialogue and isn’t all about the big joke or one liner.  I don’t remember many big one liners but there were constant bits of humor subtly being dropped in there that kind of flies under the radar.

The film actually blends in some nice tender moments between the two leads and these moments were actually my favorite parts of the film.  Sure the movie consistently made me smile and laugh aloud on a number of occasions but it was when these two actors connect and bond that the movie shines brightest for me.  Phillips is able to create dramatic scenes and comedy moments that work well on their own but I can’t help but think that they could have blended the two together a bit better.

The road trip these two take isn’t the craziest you will ever see in a movie but there will be plenty of surprises not spoiled in the trailer to be found.  The movie is very much a two man show and is about their experiences and odd bonding more than running into crazy characters and situations along the way.  My favorite moment in the film is probably a quiet and simple drug aided sequence that ends up playing into the films metaphor (?) of their relationship.

Awkward cadence or plotting aside the movie is worth seeing for Downey and Galifianakis alone.  Two of the most talented and funny guys around right now, you couldn’t ask for more oddly perfect pair.  The two have a chemistry that is irresistible and both are in top form here.  It stinks that Downey has to play the straight man here, because he is so much fun when he can go off the rails, but the film gives him enough wiggle room and Downey’s talents make the straight man role pretty funny in its own right.  Galifianakis is delightfully odd and hilarious and does so without playing some character we have already seen from him.  Ethan is an odd concoction of a person equally grating and lovable and you can’t help but fall for him along the way.  The rest of the cast is sprinkled with notable faces, Jaime Foxx being the biggest, but none of them do anything incredibly different or special as, like I said, this is a two man show.

In the end, Due Date is a solid comedy with a surprising amount of heart.  While it might not blend the comedy and heart as well as it likes upon first viewing that might be because it caught us off guard that so much heart is there.  Downey Jr. and Galifianakis are great here but their story isn’t the breath of fresh air and originality that Todd Philips last film was.  With that said, if you are a fan of any of the talents involved in Due Date then you will probably not be disappointed with what this film delivers (no pun intended).

Due Date is a B