The third season of Mad Men began last night and the results were just what we want from a series premiere in the middle of the show’s run.

(Spoilers here in for the episode)

I will say I find it rather interesting that the show reset some of the characters back their more original selves over the course of the show. Where the second season last left us, Don Draper seemed like he might be ready to give his family life a shot, leaving the women on the side behind, especially after Betty his wife is found to be pregnant with their third child. Pete Campbell also seemed to be maturing and growing up, becoming a more likeable character and less of a conniving and selfish employee at Sterling Cooper.

When the season starts up, a few months have passed as Betty is now showing and Don is on his way to Baltimore to sure up client relations as the last of the firings after the companies British merger falls upon their victims. The winners of these firings happen to be Ken Cosgrove and Pete Campbell who are anointed the new head of accounts, though Pete’s good mood is quickly dashed as he realizes they are positioned to compete.

Meanwhile in Baltimore, it seems that Don’s faithful streak lasts about as long as his last attempt as he is right back in the game as he allows a stewardess to follow through on her desires. As a fan of Betty, even though she is a bit crazy and wanting to see her and Don happy and faithful, this is of course just a head smacking disappointment. And what kills you even more is the fact that the proceeding sequences set you up to think Don might be on the right track. A flashback opens the episode as Don warms a pot of milk for his wife late at night in the kitchen as he sees the origins of his birth and where he came from family wise. Leading us to think he realizes he needs to be there for his newborn and family as he was the orphaned son of a young prostitute. (Which also seemed to reveal Don’s real name, Dick, came from insane and vulgar ramblings of a dying girl referencing her night with a client who got her pregnant) This scene is followed by a touching moment with Betty which feels so tragic after Don’s adulterous ways return to the viewer.

Sal’s story brings us the most intrigue in the episode as he dives into a one night stand with the bell boy, with the bell boy catching Sal by surprise and even leading us to believe that this might be Sal’s first experience with a man. Pete also sadly falls back into being a bit of a whiney weasel that he used to be, which sucks as he saved so much face over the course of the second season. His situation with Ken will create some interesting drama though for sure in the upcoming episodes, but I think this does not bode well for Ken Cosgrove’s future at Sterling Cooper.

We are also introduced to a couple of new characters from the new British side of the company and both are rather intriguing on the surface level we have gotten to know them. Lane Pryce is the financial officer at Sterling Cooper’s office and should be viewed as high in the company as Don, probably even more so. The character himself showed a nice balance of humor and professionalism absent from the similarly positioned Duck Phillips, though I am beginning to wonder where our character we love to hate is going to come from. His assistant, John Hooker, also has a budding storyline as he butts heads with Joan over his perceived position and title with the company, on top of the way he fraternizes and distracts the women in the office from their work with his British charm.
It was unfortunate that we didn’t really get much from any other characters besides the ones mentioned, but that is what the season is for. Peggy showed a bit of resentment towards her secretary and Pete seemed to want to have nothing to do with her when he was assigned his accounts, so I guess Pete wasn’t able to reconcile after getting torn down in last seasons finale by Peggy. Though we are left wondering about Sterling’s affair, Joan’s relationship, why Don stayed, what happened to Duck, and we are left with some juicy questions like Harry Crane’s surprising stature in the split of the company’s accounts.

The show has lost no sense of style and its humor was as sharp as ever in this episode. Draper is still as cool as they come, Betty still has a short fuse with the kids, Sterling is as free as a spirit as when we last left him, and we instantly feel right back at home with these characters and are ready for a whole new season with them; I think the premire did its job. 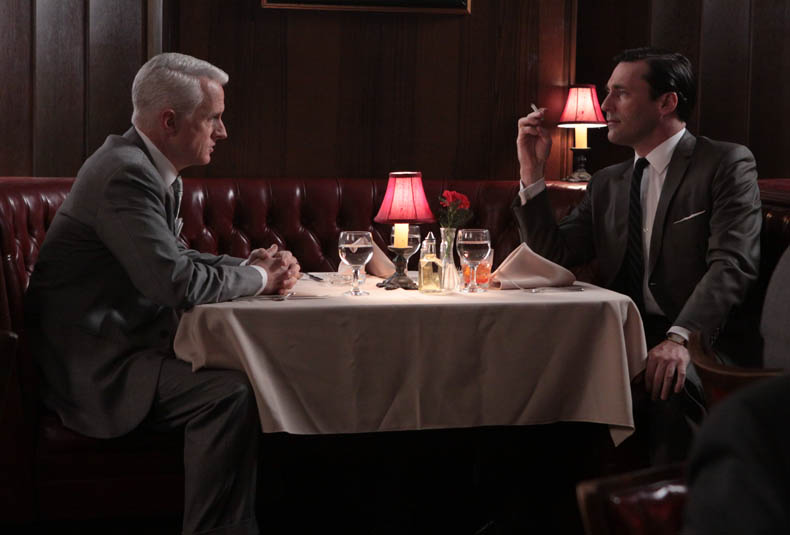