ReviewSTL.com invites you and a guest to attend a special advance St. Louis screening of THE FINAL DESTINATION. 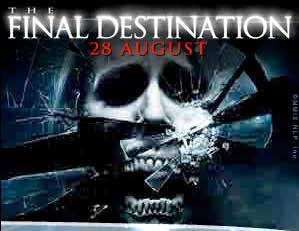 Screening is on Thursday, August 27 @ Ronnie’s

Please note that winning passes to THE FINAL DESTINATION does not guarantee admission to the film. You must arrive early as seating is first-come, first-served. It is usually safe to arrive at least 1 hour or more before show time!

In order to enter the contest, simply leave a comment below with why you want to see the movie. Winners will be randomly drawn, and notified via e-mail.

Buy entering the contest, you will also be entered into the drawing for a free “THE FINAL DESTINATION” shirt and shot glass!

On what should have been a fun-filled day at the races, Nick O’Bannon has a horrific premonition in which a bizarre sequence of events causes multiple race cars to crash, sending flaming debris into the stands, brutally killing his friends and causing the upper deck of the stands to collapse on him. When he comes out of this grisly nightmare Nick panics, persuading his girlfriend, Lori, and their friends, Janet and Hunt, to leave… escaping seconds before Nick’s frightening vision becomes a terrible reality. Thinking they’ve cheated death, the group has a new lease on life, but unfortunately for Nick and Lori, it is only the beginning. As his premonitions continue and the crash survivors begin to die one-by-one–in increasingly gruesome ways–Nick must figure out how to cheat death once and for all before he, too, reaches his final destination. The film marks the latest in the highly popular Final Destination series, and its first 3D installment, giving horror fans an especially visceral thrill ride.

To learn more about the movie, visit the official website at thefinaldestinationmovie.com