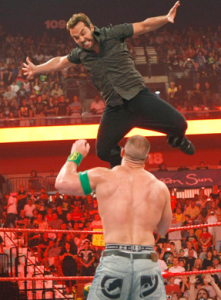 It seems that the new trend is for celebrities to guest host WWE Monday Night Raw. Obviously this is a new way to cross promote between Hollywood and Wrestling – and probably costs a pretty penny for the movie studio.

Below is a video from when Jeremy Piven guest hosted WWE RAW on Monday, August 3rd. Pretty funny stuff. As you can see, Piven was promoting his latest movie, “The Goods: Live Hard, Sell Hard” which was released last week.

Here is the list of upcoming guest hosts for future Monday nights in the works: