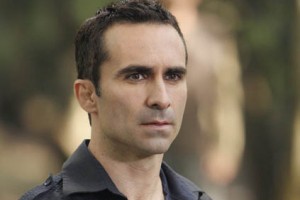 The Richard Alpert episode has finally arrived and it does not disappoint and this episode essentially shows us how it all began in this story we have been watching called LOST.

Picking up the night of Richard, Jack, and Hurley’s arrival to the beach a couple episodes ago the episode opens with Ilana telling the group an extended version of the Season 5 finale scene between Ilana and Jacob where she was bandaged up and bed ridden.  The extended bit sees Ilana all healed up and looking better with Jacob telling her that once she gets the 6 remaining candidates to the temple Ricardo will know what to do.  The group then turns to Richard on the beach who quickly informs them that they are all dead, and in hell, and that he doesn’t have the answers they are looking for before storming off to look for the Man in Black.  After a quick scene of Hurley talking to an unseen ghost in Spanish we dive head first into Alpert’s origins in the Canary Islands, 1867.

Alpert has a wife, who is sick and dying, and scrounging up every last cent they have he rushes to the doctor who is half a day’s horse ride away.  After the doctor scoffs at Alpert’s offer for the medicine, Richard accidently pushes the doc into a table, killing the doctor when he hits his head on the edge.  Rushing back to his wife, medicine in hand, he finds he is too late and is arrested and sold into slavery as a stay of execution by the local priest.  The ship is that of a Captain Hanso, and the ship is the Black Rock, and on their way to the New World they end up crashing into the Island; smashing into and destroying Jacob’s statue in the process.  After the crew comes too one of the officers goes below deck and starts killing all the slaves and on the cusp of putting an end to Alpert Smokey shows up and kills everyone left alive and leaves after staring into the soul of Alpert.

After a few days of agony, attempted escape, and an apparition of Alpert’s wife appears to tell Richard they are both in hell and that the devil is on the loose, the Man in Black arrives (in his pre-Locke look) and sets him free.  MIB quickly pushes Alpert to carry out a task, to take a knife and kill the devil that lives under the statue and in return he offers the return of seeing his wife again.  Richard agrees but is quickly beaten down and disarmed by Jacob upon his arrival and when he catches wind of the MIB’s plan, Jacob talks some sense into Richard and recruits him into the role we have grown to know him for.  Richard confronts the Man in Black, letting him know of his decision to join Jacob, disappointing MIB but he leaves the offer to join him open add gives him the cross necklace of Richard’s wife, the last connection he has to his deceased wife which Richard quickly buries.

Whoosh back to present time where Richard is returning to the site where he buried the necklace, he digs it up and calls out for MIB, telling him that he wishes to take him up on his open offer.  A rustle in the jungle reveals not MIB, but Hurley, who comes with messages from Alpert’s wife, who is now at Richard’s side, only Hurley able to see her.  After a touching moment between the two long lost lovers she gives one last message to Richard; kill the Man in Black or we all go to hell.

The final scene is back in 1867 between MIB and Jacob, post Richard conversion, and the two have a friendly chat over the fact MIB is now trying to kill Jacob and that Jacob almost seems happy to see him again soon. Bullets:

-Loved the shot that panned in front of Jacob and Richard as a wave crashed perfectly with the moving camera, great stuff.

-Nestor Carbonell was amazing in his almost entirely solo episode, delivering great work in every scene and delivering some of the best work in the series history

-Richard’s laugh at the beginning was amazing and perfectly summed up the mindset of a man slowly losing it.

-I love how the Black Rock ends up being what destroyed the statue; I don’t think anyone saw that one coming.

-Speaking of saw that coming, who predicted successfully after the first episode that MIB would set Richard free from the Black Rock and not Jacob.  Great work by the writers to subtly hint at this 9 episodes out.

-I am also glad they dedicated the whole hour to his story, it really worked especially as it served as such an important set up to the origins of this last battle between Jacob and MIB.

-Jacob and MIB’s relationship keeps surprising me as well, especially with the scene at the end of this episode with the two just chatting it up while one is trying to kill the other.

-I still don’t know who is good or bad, Jacob’s analogy with the wine was pretty convincing, but when MIB was talking about needing to kill the devil I was ready to switch back to his camp as well.

-Who’s side is Richard going to pick and what is the significance of Flocke looking over the conversation at the end between Hurley and Alpert.  I predict Alpert joins up with MIB to try and take him out, but I hope MIB doesn’t end up killing him in the end.

-I do wish we could get another Richard episode with his greatest hits as the voice of Jacob but oh well.

All in all one of my top 3 episodes of the season and I loved how they blended the story to give even more meaning to Richard as well as set up the origin even further of this end game for the Island.  Can’t wait for next week and I can’t imagine many more set up episodes left to come before this final push.  Till next time.