We finally have a title, The Dark Knight Rises, and the most likely villain in the Batman mythos, The Riddler,  has been shot down by Christopher Nolan. So, who from Batman’s Rogue’s Gallery is a likely suspect for the film? We can almost immediately remove Clayface and Killer Croc, as they don’t match up with Nolan’s Gotham Trilogy very well. Let’s take a look at who is likely. 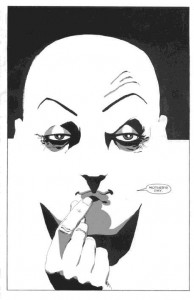 Who is he? Aka, Julian Gregory Day (a play on the Gregorian and Julian calenders) is a villain who commits crime that correspond to the day. Often times he changes his appearance to match the date.  His crimes are often petty, and far less dangerous than much of Batman’s Rogue’s Gallery. Calender man is most famous for his appearance in the Jeph Loeb written, The Long Halloween, where his is portrayed as a Hannibal Lecter type-character.

What works? Nolan has based a lot of his films around the graphic novel The Long Halloween. Carmine “The Roman” Falcone has already been featured in one of the films, and could easily make a reappearance.  What puts the icing on the cake is that the Calender Man knows that Falcone’s son Alberto is in fact the killer, but refuses to reveal it to Batman. Think of a third Batman film that has the psychological appeal of Silence of the Lambs. Wouldn’t that be pretty cool?

What doesn’t? While some of us might really appreciate a physiological drama, where Batman uses his mind instead of his fists, the movie going public wouldn’t enjoy it. The film versions of Batman have all been more focused on his fighting abilities and cool gadgets, rather than his keen detective skills. Do you think they would stop that now? 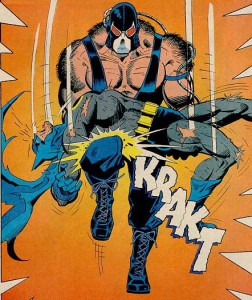 Who is he? AKA, “the man who broke the Bat”. Bane is famous for a 90s comic arc that culminated with him breaking Batman/Bruce Wayne’s back. This ushered in a dark era for the Batman series where Bruce Wayne was replaced by a crazy man named Jean-Paul Valley.  Bane uses a chemical known as “venom” to increase his physical abilities. Bane’s true strength is from his intellect. He is one of Batman’s smartest foes, and is just as brilliant of a tactician as Batman at times. Combine his brute strength and top-notch intellect, and this makes him one of Batman’s most feared foes.

What works? In later comics Bane has stopped taking “venom”, and is his own person now.  So, you remove the silly “venom” story line, and what you have is a very competent foe for Batman to face. Use Bruce’s pride of being a step ahead at all times as his downfall, so he can overcome a villain.

What doesn’t? Bane has already appeared in the atrocious Batman & Robin film, where he was presented as a mindless juiced up WWE style bad boy. There is a chance that audiences would still remember this, and not quite get why he is able to match Batman. Also, you have other similar villains who might make an easier jump to film.