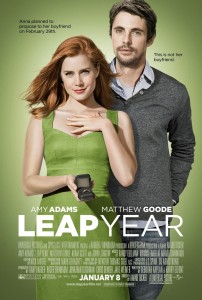 As Leap Year begins, Anna (Amy Adams) is attempting to purchase a hotly sought after condo with Jeremy (Adam Scott), her cardiologist boyfriend of four years.  Jeremy is the sort of pleasing but uninspiring man that women in romantic comedies typically find themselves entangled with just before meeting someone new and exciting.  (Smartly parodied in the little seen film The Baxter).  Anna is desperately (and I stress “desperately”) waiting for Jeremy to propose to her.  When he ends up in Ireland at the end of February, she decides to surprise him and take advantage of Irish custom in which women are “allowed” to propose to men on Leap Day in the town of Dublin.  (Gloria Steinem is rolling over in her grave and she’s not even dead yet.)  Upon landing in Ireland, a rainstorm dampens her travel.  In her attempts to get to Dublin before February 29, she discovers Ireland to be a rather lackadaisical country in which trains don’t run on Sundays and people keep irregular schedules.  Luckily she is aided by Declan (Matthew Goode), a cantankerous yet dashing Irishman willing to drive her to Dublin for a fee.  [morelink]

Of course, Anna and Declan are immediately at odds.  He looking down on her arrogant American-ness, and she put off by his languid work ethic and constant mocking.  But forced to travel together they slowly fall in love despite their differences.  That’s right, after 65 years Hollywood is still plagiarizing Frank Capra’s It Happened One Night.   Right down to the love interests pretending to be married in order to secure lodging for the evening and then sparing over who gets to sleep in the room‘s only bed.  The movie is beyond predictable; the alphabet has more surprises.  But predictability isn’t necessarily the kiss of death.  It is a genre picture after all, so some level of predictability is to be expected.  Typically, the filmmakers attempt to offset that with humor, intrigue or chemistry.  Nope, nope and nope.

The humor in the film is virtually nonexistent.  You know you’re in trouble when the biggest laugh in the film comes from one of the main characters snapping the neck of a live chicken.  Ultimately, it’s not so much that the jokes don’t work (though they don’t) as it is there are so few jokes to speak of.  It’s almost as if there was supposed to be one more script revision in which jokes were meant to be added.  If the film has any saving graces they are Amy Adams and Ireland.  Adams is as delightful as ever and working diligently to salvage a lackluster script.