Crazy on the Outside – Movie Review 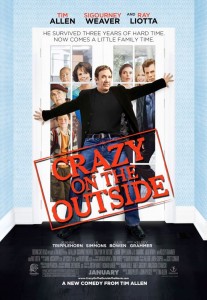 Tim Allen makes his directorial debut in a well-meaning mess of a film called Crazy on the Outside.  Allen also stars as Tommy, an ex-con fresh out of prison for pirating DVDs.  (Apparently those FBI warnings we have to sit through are serious.)  Needing a place to stay he takes up residence at his sister Vicky’s (Sigourney Weaver) house.  Tommy dreams of rebuilding his life by resurrecting his father’s house painting business.  However, his parole office Angela (Jeanne Tripplehorn) instead forces him to find more stable work at Pirate Burger.  Angela, a single mother, is concerned when her son Ethan (Kenton Duty), a perennial presence at the parole office, begins to view Tommy as something of a father figure.  [morelink]

The film is written by Judd Pillot and John Peaslee.  Though it’s the first feature film for each, they’re veterans of television shows such as According to Jim, Just Shoot Me and Coach (to name but a few).…and it shows.  The movie is paced very much like a traditional sitcom.  At times it plays less like a feature film than it does a rejected FX pilot.  Now, that’s not necessarily a bad thing.  My Big Fat Greek Wedding was nothing more than a glorified sitcom and it was quite effective.  Unfortunately, the movie is only intermittently funny.  There are funny moments but, without the benefit of a laugh-track, it becomes painfully obvious that only every fourth joke is working.  Adding to the sitcom vibe is the fact that the film exists in a world where all ex-cons are impish rogues with hearts of gold.  Not every criminal is the victim of bad luck and an ill-timed decision but you’d never know that by watching this picture.  The writers insist on putting off-putting quick-take fantasy sequences into the film (i.e. Tommy throwing a fork into his brother-in-law’s forehead) that add nothing.  The film repeatedly and relentlessly goes for “the joke” even if that joke works against the overall tone of the film.

As the film progresses, Tommy’s burgeoning relationship with Angela and her son take center stage.  It’s a plot point that proves frustrating since the role of Ethan is written as an 8-year old even though it’s being played by a 12-year old.  Ultimately, the film tries to be too many things: edgy, funny, heartwarming.  The problem isn’t in trying to mix those things but in the version of those things being mixed.  “Edgy”, “funny” and “heartwarming” get mixed all the time but not “faux edgy”, “family-friendly funny” and “treacly heartwarming”.  Somewhere in there is a good film.  It certainly has its moments.  But it can’t maintain a consistent tone and is sporadically funny at best.  Oddly, the story is strong enough that if the filmmakers had had more faith in it, they wouldn’t have had to dress it up with jokes that are out of place or flat-out unfunny.