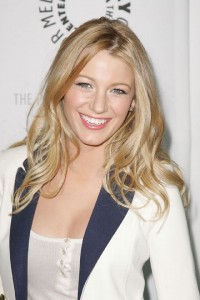 Now that Green Lantern has officially been green lit it is time to start casting some of the supporting cast.  Blake Lively has been cast as Carol Ferris the manager of her father’s aerospace company who hires the cocky Hal Jordan, played by Ryan Reynolds, who goes on to become Green Lantern.

Blake Lively is famous for her role of Serena van der Woodsen on CW’s Gossip Girl and Bridget Vreeland in Sisterhood of the Traveling Pants.  The star was initially considered a bit young for the role, but impressed director Martin Campbell with her audition tape and latest role in Ben Affleck’s The Town.  There were a lot of other actresses considered for the role including Keri Russell and Jennifer Gardner.

Lively and Reynolds have an age gap of a little over ten years. Not a big difference especially since the film will probably move the numbers a bit closer together.  Lively should be feisty enough for the role, and will hopefully be able to match Reynolds on screen charisma. I’m looking forward to the kind of chemistry they will display.

Only one question left, will she become Star Sapphire?