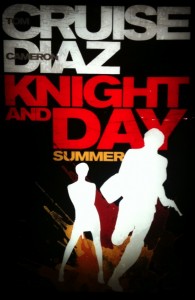 I’m not a big fan of either Tom Cruise or Cameron Diaz. Tom Cruise has been riding the crazy train for years. Although, he did redeem himself a little with his role as Less Grossman in Tropic Thunder. Cameron Diaz has not done anything to interest me in a long time. So, I was a bit surprised by the trailers for Knight and Day. (Watch the teaser trailer here.) They look like a really funny take on the spy genre.  Tom Cruise actually looks really great as the lead. The funniest thing is that his craziness seems to translate well into this role. At the moment I’m kind of looking forward to the movie, but will the general audience flock to a Tom Cruise movie again. Only time will tell.

A wholesome, Midwestern woman accidentally gets involved with an international super spy and is forced to flee the country with him while he protects a dangerous new piece of technology.