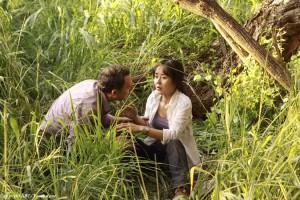 Jin and Sun are back in their first above average episode in two seasons, Season 4’s flash forward fake out, and the results are fantastic.

Over in sideways world we pick up after Jin has been detained at LAX, the 25,000 dollars Customs discovered confiscated, and he has missed his meeting he was sent for.  The two check into the hotel, separate rooms as they are unmarried, and seemingly aren’t that close.  Jin comes by late at night to say he is going to try and drop off the watch anyways and a we quickly discover that Jin and Sun are actually lovers, and very happy ones at that, and they have been putting on a front to hide their secret romance.

Sun recommends they run away with her private account and just as she is about to reveal a secret to Jin they are interrupted by Keamy and one of his goons.  Keamy brings in Mikhail, or Patchy from season 3, who is a friend of Keamy’s goon and he translates for the couple.  Sun offers Keamy the money in her private account and Keamy takes Jin to the restaurant where Sayid found him in his flash sideways.  Sun and Mikhail go to the bank only to find her account closed by her father and Keamy lets Jin know that the money he was bringing was the hit money for killing Jin for sleeping with the bosses’ daughter.   After Jin is set free by Sayid, Jin springs a trap for when Mikhail and Sun show up and after a tussle Jin comes out victorious but Sun is shot in the gut.  As a last cliffhanger she reveals to us and Jin that she is in fact pregnant.  Bullet time:

-Great episode on the sideways side of things again tonight.  It is so great to see these two together, especially happy together, and you couldn’t help but be reminded of how Jin/Sun episodes used to be instant classics back in the early seasons.

-Weren’t a lot of mystery’s or secrets revealed here, but I do wonder if Sun’s Dad has it out for her as well on top of trying to knock off Jin.  Wiping her bank account isn’t a good sign.

-Jack operating on Sun coming up?  Or even Juliet being brought into the mix somehow?  Time will tell.

-Jin and Sun being happy together definitely helps further solidify those Jacob/MIB epilogue theories floating around for the reason of the sideways stories.

-Sun never learned English, she must really like Jin this time, and that scene with the two seducing each other was just sexy

And with that let’s go to the Island:

Now this was our first episode since the premiere where we jumped back between Camp FLocke and Camp Sheppard and it worked and felt much more comfortable and right then the camp specific back and forth we have had, even when those were succeeding.  FLocke is pitching Jin and tells him that he is going to bring back Sun and Jin tries to get the hell out of dodge when Smokey goes Sun hunting.  Unfortunately Widmore’s people scoop him up and take him to Hydra Island and knocking out the whole camp in the process.  Meanwhile, Locke’s bid to bring back Sun doesn’t really work and she knocks herself and the English out of herself when she runs into a tree trying to get away from Smokey; who didn’t threaten her by the way.  Sun wakes up unable to speak English to which Jack diagnosis’ as temporary but she gets frustrated not being able to defend her position to a returned and rejuvenated Richard Alpert who wants to take the camp to Hydra Island to blow up the plane in hopes of keeping Flocke from leaving the island.  Jin wakes up on Hydra Island in Widmore’s captivity and his people try and get Jin to verify maps he signed during the Dharma days pointing out electromagnetic areas.  Jin asks to see Widmore, who obliges him, but only after an encounter between MIB and Widmore on Hydra’s beach with a sonic pylon line between them.  Flocke wants Jin back, but really wanted to drop off Sayid to find out what Widmore’s secret is deep within the sub.  When Widmore meets with Jin he offers to show him his special cargo, but we get a glimpse of him before Jin does as Sayid makes it to the docks to ID the secret as Desmond.  Bullets:

-Desmond’s reveal isn’t much of a shocker, but I am greatly intrigued to find out why he is so important.  Like Faraday said, Desmond is unique to this Isalnd.

-Dick move by Widmore to steal him from his daughter, maybe for a second time?

-Love the reinvigorated Alpert and Jack was super helpful and likeable as he is now trying to convince the other candidates to buy into the hype of destiny on the island.

-Sayid is going further and further to the dark side.

-Kate and Claire seem way too bored for the war that is coming.

-Widmore definitely wants to keep MIB on the Island, but I don’t believe he is on Jacob’s side.  This is going to be a three pronged war that I think will be the downfall of MIB as he won’t be able to hold off both sides.  I am starting to buy into Ben’s exploitation bit about Widmore more and more.

-Speaking of the Island, is the final showdown really going to go down on Hydra?  Seems to be pointing that way right now.

And with that, that is all I got, Desmond episode next week it seems and I am intrigued to see what alternate line we get with him.  Flash forward, back, sideways, out of body experience, and I wouldn’t be surprised if Faraday shows up next week.  Until then…